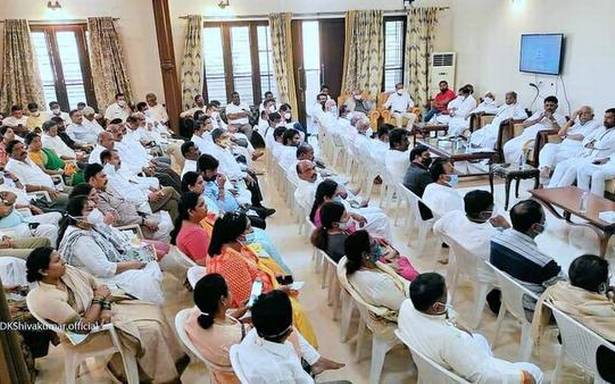 Nearly 170-km padayatra — ‘Our water our rights’ — will pass through 15 Assembly constituencies before culminating in Basavangudi on January 19.

Amidst threat of COVID-19 and disruption by the State Government owing to weekend curfew rules, the Congress successfully managed to launch it’s 11-day padayatra seeking early implementation of Mekedatu drinking water project on January 9 morning. Soon after the launch, Chief Minister Basavaraj Bommai slammed the event and termed it as a political gimmick.

Despite uncertainty over participation of people and leaders, the padayatra started from Sangam in Kanakapura taluk of Ramanagara district, about 100 km from Bengaluru, with thousands of Congress workers and hundreds of leaders, including KPCC President D.K. Shivakumar, Leader of Opposition Siddaramaiah, and veteran leader and leader of the party in Rajya Sabha M. Mallikarjun Kharge taking part. Former KPCC chiefs Allam Veerabhadrappa, G. Parameshwar and R.V. Deshpande were present along with the three current working presidents, legislators and a host of leaders.

The nearly 170 km padayatra — ‘Our water our rights’ — will pass through 15 Assembly constituencies before culminating in Basavangudi on January 19. On the first day, the padayatra will stop at Doddaalanahalli.

The padayatra was a sight of show of unity by the party as ambitious leaders from different camps and different regions shared the stage with bonhomie, offering an united face of the party, seeking the implementation of the project. Symbolically, the padayatra was launched by Hindu, Muslim and Christian religious leaders by watering plants on the stage while political leaders marked the launch by beating a drum (nagari).

The ₹9,000 crore Mekedatu drinking water scheme involves construction of balancing reservoir at Mekedatu to impound excess water. Besides ensuring drinking water supply to Bengaluru and other districts in the vicinity, it will also generate power. The project has been opposed by Tamil Nadu, the lower riparian State in the Cauvery river basin.

The padayatra has already raised political dust in the politically-sensitive Vokkaliga-dominated Cauvery basin districts in South Karnataka where water issues connect emotional chords. It is also the area that the Congress is in direct fight with Janata Dal (Secular), which draws it’s political strength from Vokkaliga heartland.

Earlier, Mr. Shivakumar, who was among the earliest to arrive at the venue, took a dip in river Cauvery and offered pooja. He also took the padayatra flag in a coracle to the Sangam before arriving on the stage.

Speaking at the inauguration, Mr. Kharge said that an unnecessary controversy has been stoked by Tamil Nadu by opposing the project that is set to help both the States. Mr. Siddaramaiah detailed the work of his Government during his five year tenure with respect to the Mekedatu project and accused the BJP of not doing anything since the last two-and-a-half years. The BJP is delaying the project to expand it’s base in Tamil Nadu. “The padayatra will not stop at any cost and whatever efforts that there BJP Government makes.”Mr. Shivakumar said that there is no politics in the padayatra but seeking water for 2.5 crore population. He also recalled the Congress contribution to irrigation sector, pointing out that 20 of the total 26 reservoirs in the state was built during Congress regimes.

Meanwhile, Government sources said that the decision to allow the launch of the padayatra was taken earlier since there were women, actors and religious leaders in the congregation. “Any mishandling on ground would have put the Government in spot. Chief Minister Basavaraj Bommai and Home Minister Araga Jnanendra are monitoring the situation constantly,” they said.Slamming the padayatra being taken out in the times of COVID -9 surge, Mr. Jnanendra said that those leaders who have congregated at Sangam should apologise to the people for delaying the project. He also warned of action against those violating the pandemic norm.