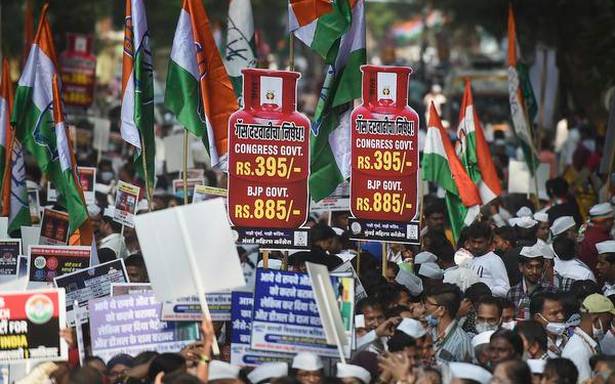 We will raise voice of millions of Indians on soaring inflation, it says

The Congress on Sunday launched a two-week agitational programme by kicking off the Jana Jagran Padayatra against price rise and policies of the Narendra Modi Government.

“Flagged off #JanJagranPadYatra organised by Mumbai Regional Congress Committee in Mumbai today to raise the voice of the millions of Indians suffering due to Modi Govt’s inability to control soaring inflation. We will continue this movement across the country,” tweeted party general secretary (organisation) K.C. Venugopal.

Such padayatras are being organised by all the State units of the party.

In October, the Congress Working Committee (CWC) had decided to hit the streets over the “runaway inflation” and consistent increase fuel prices.

On November 3, a day after the setback to the BJP in the byelections to 30 Assembly and 3 Lok Sabha constituencies across 14 States, the Centre reduced the excise duty on diesel and petrol by ₹10 and ₹5 respectively.