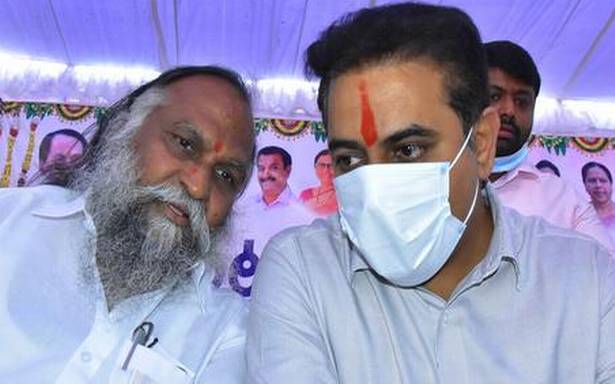 Also present in the programmes was Mr. Reddy’s TRS rival in Sangareddy district Chinta Prabhakar and MPs K. Prabhakar Reddy and B.B. Patil. Finance and Health Minister T. Harish Rao who was expected to attend as Minister representing the erstwhile Medak district was conspicuous by his absence.

During an informal discussion at Collectorate, Mr. Rama Rao reportedly asked Mr. Jayaprakash Reddy to take care of TRS leaders. Mr. Reddy jokingly told the Minister that the latter had a bigger role in the matter.

Mr. Rama Rao invited both Mr Jayaprakash Reddy and Mr. Chinta Prabhakar on to the dais.

Mr. Reddy had broken away with the TRS 15 years ago after having been elected to Assembly on the party ticket. Since then he had a running feud with the TRS leadership.