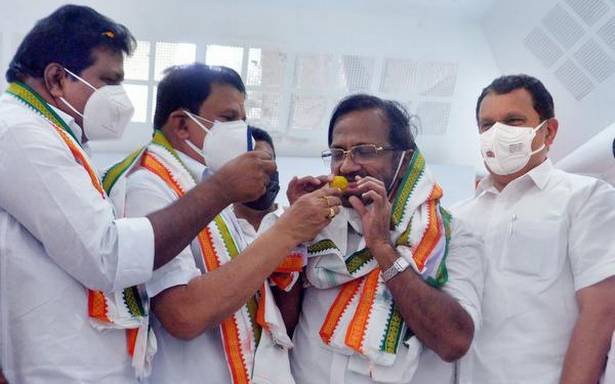 Kerala Pradesh Congress Committee (KPCC) campaign committee chairman K. Muraleedharan, MP, on Saturday said the party must strive to bring back those who had resigned owing to various differences. However, it must ignore those who were expelled for indiscipline, he said.

Inaugurating the ascension of Palode Ravi as the president of the Thiruvananthapuram District Congress Committee (DCC) here, the former KPCC chairman said the party must work towards convincing those who had left to return to the Congress fold. It could not afford to sideline any person who remained committed to realising the party’s goals.

A day after former KPCC secretary P.S. Prasanth joined the CPI(M), Mr. Muraleedharan called the latter a “waste box” that “collected those rejected by the Congress.”

Reiterating the Congress’ stance to usher in a semi-cadre system, Mr. Muraleedharan said the party was in dire need of a significant shift in its policies. “The party can no longer harbour indiscipline and function in a disjoined manner. Despite some highlighting the few victories, the Congress has faced two successive defeats in local body and Assembly elections. Notably, never since 2001 has the party been able to emerge with the highest number of seats at the Assembly polls. Even when the party wrested rule in 2011, the CPI(M) had then the highest number of seats,” he pointed out.

Mr. Ravi, who took over the mantle of DCC president from Neyyattinkara Sanal, said organisational failure had led to the party’s defeat in the district during the recent Assembly and local body polls. Efforts must be made to strengthen the organisation right from the lower tiers. It must also be able to mobilise its strong support base in the district, he added.