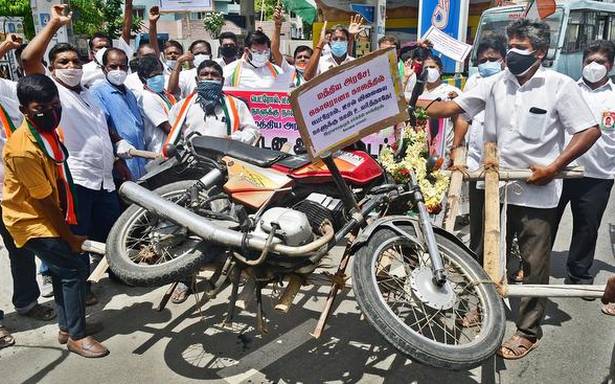 In Coimbatore, Tamil Nadu Congress Committee working president Mayura S. Jayakumar led the protest in front of a refuelling station on Avinashi Road. Around 100 persons participated in the protest with groups of 10 each moving to the front for a while to shout slogans. The cadre placed a two-wheeler atop a makeshift hearse to mark their protest.

Mr. Jayakumar blamed the Centre for failing to check fuel prices, particularly at a time when people suffered under the impact of the second wave of COVID-19. The oil marketing companies should reduce fuel prices and the Centre excise duty.

Asked about the Dravida Munnetra Kazhagam’s promise of reducing fuel prices after returning to power, he said the DMK government was busy fighting the COVID-19 spread in the State. It would very soon reduce the State tax on fuels.

In Tiruppur, members of the Congress party led by Tiruppur North District Congress Committee president P. Gopi staged a demonstration at a fuel station on Dharapuram Road. The members were masked up and ensured physical distancing norms as part of COVID-19 safety protocol, he said.

In Erode, the cadre of Erode Urban District Congress Committee staged a demonstration. Led by its president E.P. Ravi, the cadre said the hike almost every day in May was causing hardship to the common people who lost their livelihood due to the pandemic and the total lockdown. They said when the price of international crude oil was stable, oil marketing companies in the country continued to hike the prices to earn more profits.

In Salem, the cadre protested in front of petrol pumps and condemned the Centre for not taking measures to control the hike. The protesters demanded that the Centre should reduce the taxes on fuel.

In Krishnagiri, the protest was led by A.Chellakumar, MP. The party members dubbed the price hike as an attack on the common people. The protesters also slammed the rise in prices of other essential commodities.