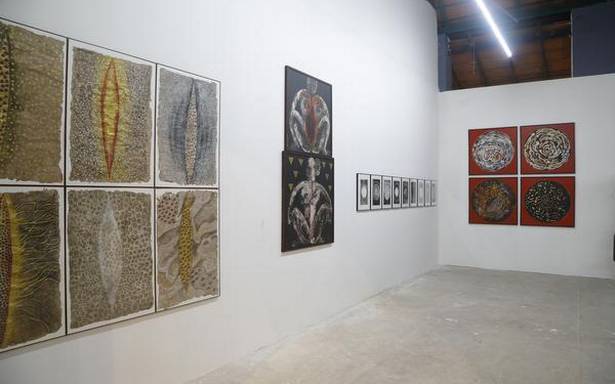 One of the elements that makes Lokame Tharavadu, an exhibition of contemporary art, stand out is the sheer number of artists — 267 — participating. The artworks featured include that of 56 women artists who practise their art on various media.

Kajal Deth is known for her photographic works that document the great deluge of 2018. Some of her photographs and one video art are part of the exhibition. The video art showing an old man turning a wheel refers to him as a machine in the coir industry.

"Growing up near the sea and the backwaters of Alappuzha, my visual sensitivity has been influenced by the lives of coir workers, farmers and fishers," says Kajal.

Radha Gomathy works without a studio. Her ‘Alexa! Win this War!,’ an installation of 87 drawings and one text is part of the display. The drawings configure violent, angst-ridden, remorseful and ecstatic moments from the life of a couple.

Some of the paintings by women artists on display at Lokame Tharavadu exhibition. | Photo Credit: Special Arrangement

Many female artists see Lokame Tharavadu as an important milestone. "I don’t know about another show in the country that features this many women Malayali artists," says P.S. Jalaja, an artist who is part of Lokame Tharavadu.

"Though the women artists in Kerala have perhaps 50 years of history, there are only about 200 of them who are actively practising. This is an important milestone and a matter of great pride," she adds.

Rathi Devi, whose painting series titled ‘Ummaram’ is on display, considers the show a great opportunity for her. “The display of each work is special. I think we can reach out to humans only by referring to other species. My art practice is also based on this thought,” she says.

Sreeja Pallam, who has exhibited 40 paintings of working women, feels that women’s art has another dimension and that Lokame Tharavadu is displaying its variety and attitudes.

Aami Atmaja, another participant, says she has always felt that nobody knew about the women artists practising here. “The paintings of artists such as Santha C. on display here were kept under the bed for years. There are a lot of such artists and many of them may not have studied painting academically. I think this show solves the visibility problem faced by women artists.”

According to Smitha G.S., another participant, one reason for this inadequate participation of women artists is that only a few are ready to come out of their houses.