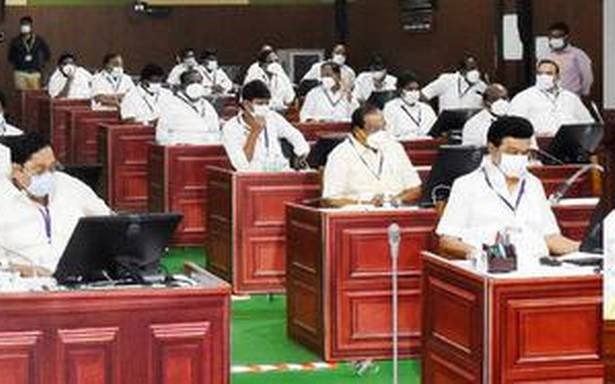 In his customary address to the TN Legislative Assembly on Wednesday, Governor R. N. Ravi, reading from a prepared speech, highlighted the issues of GST compensation, the relief needed for damage caused by the rains and the release of fishermen

The Tamil Nadu government on Wednesday urged the GST Council and the Union Finance Ministry to continue the GST compensation at least till June 30, 2024 contending that the State’s revenues were yet to recover from the pandemic. It also urged the release of funds totalling about ₹6,230 crore from the National Disaster Response Fund immediately to ameliorate the effects of damage caused by the recent heavy rains and flooding.

During his customary address to the State Legislative Assembly session in Kalaivanar Arangam that commenced with the singing of the Tamil Thai Vaazhthu, TN Governor R.N. Ravi said since the introduction of GST, the State was not able to realise the high growth of tax collections that it had witnessed during the VAT regime.

“The COVID pandemic has further exacerbated this problem. The State’s revenues are yet to recover and it would adversely impact the State finances if the compensation is not extended for at least two more years,” he read out, from a prepared speech.

Noting that though Tamil Nadu was endowed with rich mineral resources, the State government did not realise adequate revenues from mining, the Governor said: “In fact, revenues from mining have stagnated over the last decade.” In order to carry out mining in an ecologically sustainable manner and mobilise revenue for the government, a ‘Natural Resources Management Plan’ would be formulated, he said.

Referring to the heavy rains and eventual flooding of many parts of Tamil Nadu during the Northeast monsoon, he said that extensive damage to roads, bridges, water bodies and crops was reported. The government has submitted detailed memoranda seeking funds to the tune of ₹6,230 crore to undertake relief and restoration work.

“We urge that funds from National Disaster Response Fund be released immediately, in order to ameliorate the effects of damage caused by the floods,” the Governor said. Under the direct supervision of the Chief Minister, there was timely release of surplus water from dams and reservoirs as a precautionary measure, he said: “It is praiseworthy that the Chief Minister led from the front, personally visiting the affected districts and ensuring that immediate relief was provided to the affected people.”

The State government also strongly urged the Centre to take immediate steps to release 68 fishermen and 75 fishing boats belonging to Tamil Nadu presently in Sri Lankan custody. “To find an amicable solution to this persisting issue, we exhort the External Affairs Ministry to take measures to resume direct talks between Indian and Sri Lankan fishermen.”

To safeguard fishermen from natural calamities, the State government plans to establish transponders in all mechanised boats in the State to provide a seamless communication systems, he said.

Mr. Ravi, who read out from a prepared speech text, said entrance exams created an unequal platform by being inherently discriminatory against rural students. “Hence, this government is of the firm view that entrance exams like NEET are unnecessary for student admissions to professional courses and will continue to reiterate this position."