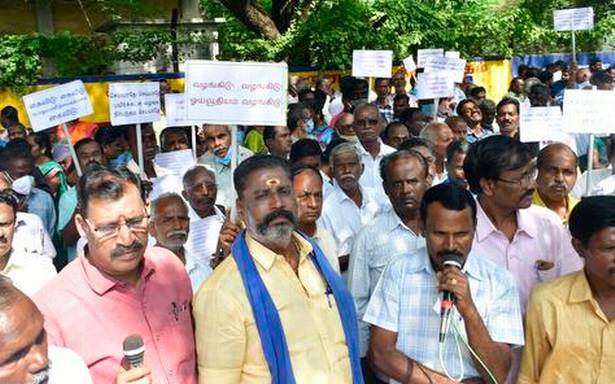 Members of the Tiruchi wing of the Tamil Nadu State Primary Cooperative Bank All Employees Association (TACBEA) submitted a 15-point demand to the Collector on Monday.

The protesters would boycott work on January 5 if their demands were not met, they said.

Around 600 members attached to TACBEA organised a protest outside the District Collectorate in support of their demands including that the members of cooperative societies be treated in a respectable manner and be heard.

The protesters alleged that higher officials were dismissing the workers’ needs and sanctioning transfer orders for employees based on ‘personal grudge’ Other demands included passage of a comprehensive order on the crop insurance scheme and its waiver.

“The method for applying for the scheme and its waiver seems to differ from district to district. We request a comprehensive order,” D.P.S. Kamaraj, district secretary, TACBEA said.

While a pension scheme for all employees had been approved by the government, it was yet to come into practice, he added.