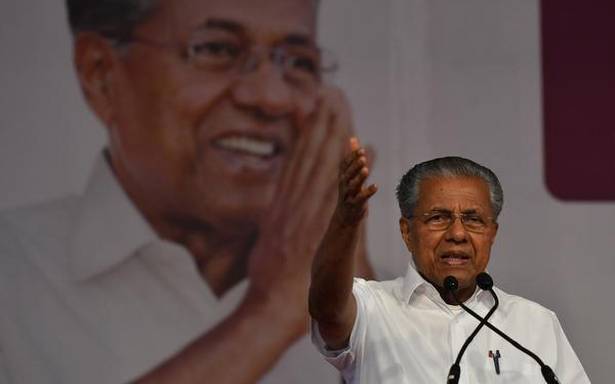 The Archaeological Survey of India has been engaged to ascertain the authenticity of the items that were in the possession of the alleged fake antiquities dealer Monson Mavunkal.

The copper plate manuscript on Sabarimala that was in the possession of the alleged fake antiquities dealer Monson Mavunkal has been found to be a bogus artefact, Chief Minister Pinarayi Vijayan informed the Assembly on Monday.

Replying to a question by the Leader of Opposition V.D. Satheesan, Mr. Vijayan said that the government had at no point claimed that the article was genuine.

He added that a Crime Branch probe was underway into the nefarious activities of the alleged racketeer. The Archaeological Survey of India (ASI) has been engaged to ascertain the authenticity of the items that were in his possession.

While evading questions on the suspected links Mr. Mavunkal had with senior police officials, Mr. Vijayan said the police had provided protection based on a request submitted by the accused.

The decision was found to be a normal action, considering the request was made to ensure security. Urging legislators not to adopt a prejudiced stance, he said that the ongoing investigation will consider all possible angles to the conspiracy.

The former State Police Chief Loknath Behera had ordered a detailed probe into the matter in a letter sent to the Additional Director General of Police (Intelligence) on December 21, 2019.

The Intelligence wing had been directed to gather information on the accused following a visit that Behera had made to his house.

Based on the intelligence report, Mr. Behera had formally written to the Enforcement Directorate on February 5, 2020 to seek a probe into the source of income of the accused.

The Chief Minister, however, added that the circumstances of Mr. Behera’s visit to Mr. Mavunkal’s house was unclear.

On a question posed by Congress’s Sajeev Joseph regarding the alleged presence of the racketeer in CoCoN, the international cyber security and policing conference organised annually by Kerala Police, Mr. Vijayan said that his name did not appear in the participants’ register.

To this, the Chief Minister replied that the complaint was found to have certain references of such involvement. Such allegations were being investigated.

He added that any possible link to criminal activities will be considered with due seriousness.