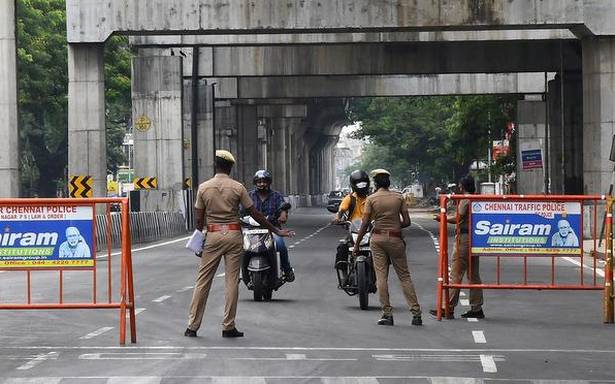 Directs government to monitor and control prices of drugs, hospital charges and prices of oxygen and vaccination

The Madras High Court on Monday suggested that the State government can impose a complete lockdown not only on May 2, when the Election Commission of India (ECI) counts the votes polled for the Assembly election in Tamil Nadu, but also on May 1, in an attempt to prevent the spread of COVID-19 and curb the movement of vehicles other than those involved in counting and other related activities.

Chief Justice Sanjib Banerjee and Justice Senthilkumar Ramamoorthy wrote: “If necessary, the State may consider imposing a lockdown on May 1, which was traditionally a holiday, and again on May 2, which is a Sunday, and only allow movement of vehicles needed for counting and related purposes, apart from emergency vehicles. If an announcement in such regard is made well in advance, say by April 28, 2021, the ordinary citizen may have sufficient notice.”

The first Division Bench made the suggestion while passing interim orders on a suo motu public interest litigation (PIL) petition taken up by the court last week to monitor the preparedness of the State government to fight the raging second wave of COVID-19. Advocate General Vijay Narayan and Health Secretary J. Radhakrishnan apprised the court of the measures taken so far by the State.

After hearing them out, the court directed the State government to monitor and control the prices of drugs such as Remdisivir, rates charged for admission in private hospitals and also the prices of oxygen as well as vaccination.

The court took note that some private stockists reportedly source the drugs from Maharashtra and Gujarat and sell them in the black market at exorbitant rates without insisting upon on prescriptions, lung congestion reports and so on. The court recorded the submission of the Health Secretary that squads had already been formed to conduct raids and initiate action against the black marketeers.

The A-G said the Centre had allocated only 59,000 vials of Remdisivir to Tamil Nadu till April 30 as against the pending orders for 2.5 lakh vials. The State had represented that the supply should be based on the number of active cases in each State. Further, the government had set up an outlet at Kilpauk in Chennai to sell the drug at cost price to private hospitals as well as patients on production of necessary medical records.

Pointing out that not all patients would require such drugs, the judges said the relatives of the COVID-19 patients sometimes panic and attempt to procure drugs from the black market. They directed the government to widely publicise the “dos and donts” in the media so that people get to understand that not all COVID-19 patients require hospitalisation and drugs. The court also impressed upon eschewing VIP culture in allotment of hospital beds.

Earlier, the A-G said that Tamil Nadu had been conducting over 1.1 lakh Reverse Transcription- Polymerase Chain Reaction (RT-PCR) tests every day to find out COVID-19 positive cases and that it had so far tested 2.17 crore samples, the highest in the country. Of the samples tested, 10.51 lakh (3.94%) had turned positive but 9.43 lakh of them were discharged from hospitals after treatment which meant that 90% of the positive patients got cured completely.

Stating that so far 13,395 deaths had been reported in the State due to COVID-19, the A-G said the death rate was 1.2% of the positive cases. He attributed early identification, intensive testing and better hospital care as the reasons behind the low mortality rate. He said 263 RT-PCR testing centres were functioning in 69 government hospitals and 194 private facilities were also spread across the State to test for COVID-19.

It was also brought to the notice of the court that 90% of the RT-PCR tests were being done only in the government testing centres and Tamil Nadu was the only State to do so. On availability of vaccines, the court was told that the Centre had so far supplied 55,03,590 COVISHIELD and 10,82,130 COVAXIN vaccines to the State and that 52,51,820 vaccine doses were administered to the eligible people as on April 24.

Mr. Narayan said the oxygen storage capacity in government institutions had been increased from 395 to 882 tonnes. Private hospitals too had increased their oxygen storage capacity to 1,167 tonnes and it was the second highest in the country, he added. He said the current requirement of oxygen in the State had increased to 310 tonnes a day and therefore the Chief Minister had requested the Centre to not divert the oxygen to other States.