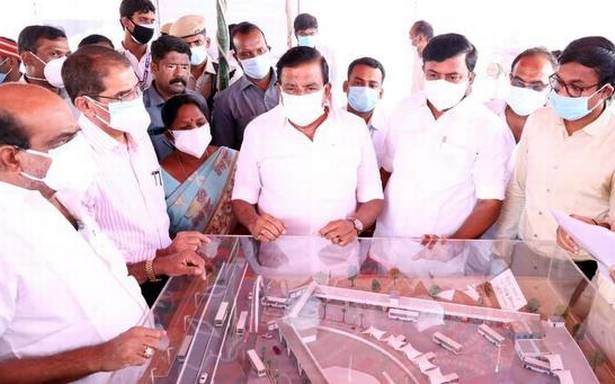 As many as 46,753 persons have received at least one dose of COVID-19 vaccine in Tiruppur Corporation and the available stock of vaccine doses has been exhausted, Minister for Municipal Administration K.N. Nehru said

The COVID-19 positivity rate in the Tiruppur Corporation limits has come down to 8.11% following a decline in new cases, said Minister for Municipal Administration K.N. Nehru on Tuesday.

Mr. Nehru reviewed the construction work carried out by the Corporation under the Smart Cities Mission and chaired a review meeting with officials from the Corporation and district administration to take stock of the COVID-19 preventive measures.

As many as 46,753 persons have received at least one dose of COVID-19 vaccine in the Corporation limits and the available stock of vaccine doses has been exhausted, Mr. Nehru said. “The Chief Minister is trying to procure additional doses, which is expected to arrive this week,” he added, following which the vaccination drive will resume.

According to a press release, Mr. Nehru inspected the construction work at the Old Bus Terminus, which is being done under the Smart Cities Mission. He also visited the control room set up to provide tele-counselling for COVID-19 patients at the Tiruppur Corporation headquarters on Mangalam Road.

The 46,753 beneficiaries in Corporation comprise 9,940 persons in the 18-44 age group, 36,813 persons aged 45 years and above, 2,348 healthcare workers and 291 frontline workers. A total of 78 containment zones were set up in the Corporation limits and around 1,100 field workers were appointed to carry out door-to-door surveys, the release said. The field triaging system implemented by Greater Chennai Corporation, where doctors visit the residences of COVID-19 patients for treatment, was also being implemented by the Tiruppur Corporation.