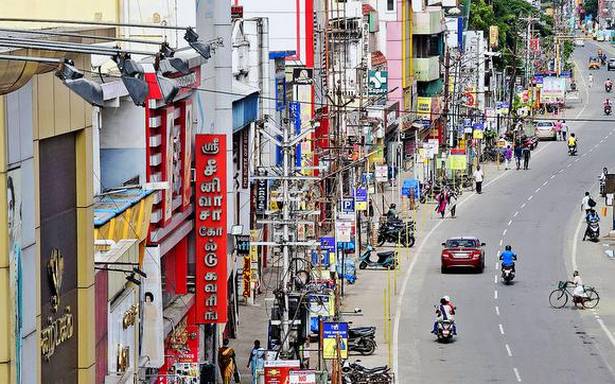 Coimbatore Corporation has so far identified around 35,000 commercial establishments in an exercise to widen and strengthen the Dangerous and Offensive (D&O) Trade Licence net.

Commissioner Raja Gopal Sunkara said a few days ago that the Corporation had entrusted to field survey volunteers, whom it had engaged for door-to-door survey as a part of COVID-19 management strategy, the responsibility of identifying all commercial establishments in the city and collecting their Licence data.

The volunteers who had so far visited each of the 35,000 shops and establishments in the city continued to go to every place even though the Corporation’s deadline for the task was August 31.

During the course of the data collection exercise it had come to light that many establishments did not have a valid licence or had let the licence lapse and in a few cases the shopkeepers had not paid licence fee for at least a decade.

After completing the data collection exercise, the Corporation would verify the data with the information it had to update it by removing data of shops or commercial establishments that no longer existed.

Likewise, the Corporation would start asking those commercial establishments without valid D&O Trade Licence to get one and those with expired licence to renew. This was a part of the Corporation’s exercise to not only boost revenue but also migrate the data from it servers to the facility used the Commissionerate of Municipal Administration, Urban Tree Information System.

The Corporation had recently migrated property tax, water charges details to the system.

The civic body had divided the property tax assessments into various groups depending on the tax value and arrears amount. It had assigned bill collectors, assistant revenue officers and assistant commissioners of the five zones and the deputy commissioner with the task of going after each of the assessee to collect the arrears.

The bill collectors would go after those assessments with low property tax the assistant revenue officers with the next level of tax and arrears and finally the deputy commissioner with the high-value assessments.

As a part of this exercise, the Corporation had started also looking at collecting arrears from those assessments where it had to issue proceedings or complete minor formalities following court orders.

For, there had been instances where even after favourable verdicts, the Corporation’s failure to complete formalities had resulted in the assessee not able to pay tax.