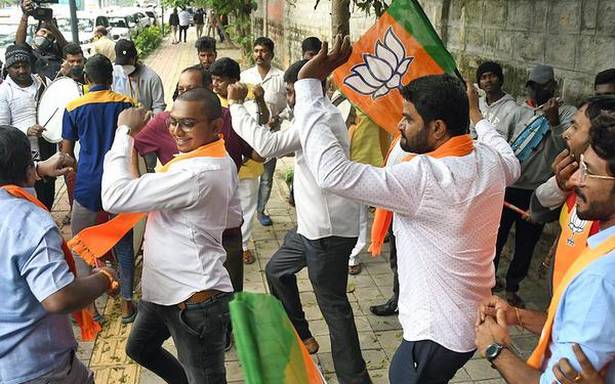 Congress too bags 11 seats, but BJP is hopeful of Lakhan’s support

The Legislative Council election results have set the alarm bells ringing for the BJP as the Opposition Congress too has matched its performance by winning 11 seats.

The ruling party has fallen short of the majority mark in the Upper House by just one seat as the party managed to increase its tally to 37 in the 75-member Council by winning 11 of the total 25 seats that went to polls. However, sources in the BJP said it would still manage to reach the majority mark as Lakhan Jarkiholi, who won as an Independent, is expected to back the party.

BJP leaders are hoping to achieve this mark in the next elections to the Council which are scheduled in June. Reaching the majority mark in the Council will make it easy for the BJP Government to get clearance from the Upper House for any Bills or policies that are in tune with the party’s core ideology, which the party is keen on ahead of the 2023 Assembly elections.

Another feature of these elections is that the BJP, which was hitherto being referred to as a party with an urban base, has now managed to make inroads into rural areas too as a majority of the electoral college comprised village panchayat members.

At the same time, these elections have also come as a caution bell ahead of the 2023 polls as the Congress has matched its performance by winning 11 seats.

These elections have also exposed chinks in the party’s armour as its chief whip Mahantesh Kavatagimath has lost in Belagavi despite having political bigwigs such as Jarkiholi brothers, Minister Umesh Katti, and the former Deputy Chief Minister Laxman Savadi from the district in its fold. The fact that the youngest Jarkiholi sibling, Mr. Lakhan Jarkiholi, has won as an Independent while the BJP’s official candidate has lost shows that the party has the complex task of making the Jarkiholis to fall in line with the party’s diktat.

Meanwhile, Chief Minister Basavaraj Bommai said the results were good though the party had expected to win three or four more seats.