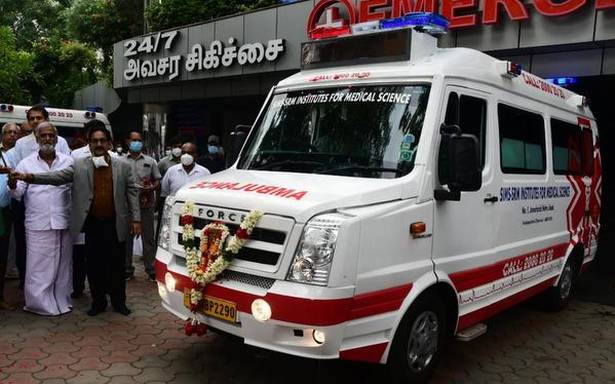 Minister P.K. Sekarbabu said the TN government plants to appoint trustees to all temples soon; he also said a helpline will be launched for Sabarimala devotees

Tamil Nadu Minister for Hindu Religious and Charitable Endowments (HR&CE) Department, P.K. Sekarbabu, on Tuesday said that the recent order of the Madras High Court restraining the HR&CE Department from opening new colleges using temple funds was not a setback.

Addressing the media after flagging off an ambulance from SIMS Hospital to be stationed to help devotees at Sabarimala, he said that the High Court had not objected to the idea of opening these colleges, but had only said that it can be done through the trustees of the temples.

Blaming the previous AIADMK government for not appointing trustees to many temples in the last 10 years, he said that the present government would take swift measures to appoint trustees.

Stating that the State government respected the High Court’s order, he expressed hope that the measures to be taken by the government will satisfactorily address the concerns raised by the court. He said that the measures will include courses in religious instructions in Hindu religion in the proposed colleges.

Helpline to be launched

Mr. Sekarbabu said that steps were being taken towards this initiative by HR&CE Commissioner J. Kumaragurubaran, and a formal announcement on this will soon be made by Chief Minister M.K. Stalin.

He lauded SIMS Hospital for deploying its medical team and an ambulance with advanced cardiac life support facilities for the fourth year in a row, to help Sabarimala devotees during the pilgrim season.

Raju Sivasamy, vice-president, SIMS Hospital, said that the initiative was launched four years ago in association with Sree Ayyappa Health Amenities Society (SAHAS) to meet the medical needs of the pilgrims, particularly to treat any cardiac emergencies.

While the ambulance with advanced facilities will be stationed at Pampa, a medical team will be deployed near the temple. “In case of any patients facing cardiac events, they will be stabilised by the team, then taken to the ambulance and moved to the government hospital in Kottayam,” he said.

Last year, he said that around 4,000 pilgrims benefited from the facility, of which 200 persons had reported cardiac-related ailments.