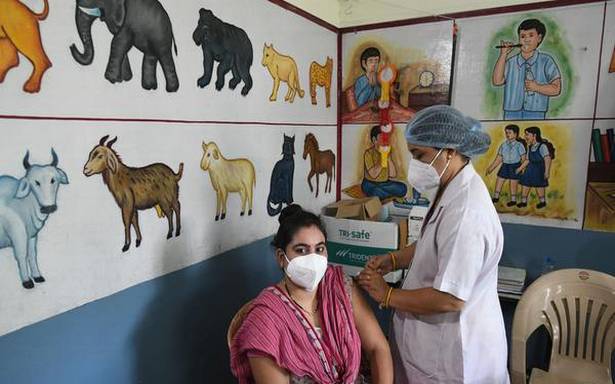 Until 60% of the population was not covered, it would not be possible to attain herd immunity, they say.

If we do not vaccinate quickly, public health can be in jeopardy and with that is also linked economic growth. So the sooner more number of people get vaccinated the better it is for society and the country, say doctors who have also expressed their worry about the slowing down of the falling COVID-19 numbers and the growing threat of a third wave.

“The current vaccination rate in India is far from satisfactory though in absolute numbers India surpassed the U.S. in terms of total number of vaccinations. India’s current vaccination rate doesn’t match up to what is actually needed. This will delay covering the people with vaccination, which is, till date, the only viable way of breaking the chain of transmission and averting severe diseases and deaths in people who get infected,” said Gauri Agarwal, IVF Expert, founder-Seeds of Innocence.

She added that in a vast and overpopulated country like India, this may hasten the onset of a third wave.

“Early this year, India launched the world’s biggest vaccination drive to protect people against COVID-19 but inoculating even 60% of the over 130-crore population is a mammoth task,’’ said Archana Dhawan Bajaj, gynaecologist-obstetrician and director of Nurture IVF.

She added that though the Central government was pushing the vaccination drive, the number of people who got both doses was less and even for the first dose vaccine hesitancy was seen among some people.

“Globally, India has taken a lead by providing the highest number of doses. But in terms of the number of people, out of the total population, it is much less than desired. As vaccination is the most powerful weapon to fight against the COVID-19, India needs to further ramp up drive and efforts should be made to cover nearly 60% of the population by September this year,” she said.

Dr. Archana added that it was widely admitted that India needed to speed up its universal vaccination drive and until 60% of the population was not covered, it would not be possible to attain herd immunity.

“Moreover, the fear of third or future waves looms large in the country. Global trends with Delta variants also indicate possible threats, hence the vaccination drive must be ramped up immediately to ensure that the maximum number of people are vaccinated to achieve herd immunity, which will protect the majority of the population from severe disease in the third wave or future waves,” she said.

“Government must employ effective visual communication on TV and digital platforms to address vaccine hesitancy in people and nudging them to follow COVID protocols at all times. They must also ensure pregnant women and lactating mothers are able to get vaccinated and may hold area-wise special camps for ease of access and their convenience,” she said.

“While we are awaiting vaccination approval for children [under 18], it is assumed that adult vaccination campaign will result in lessened risk of infection to the children,” said Sanjeev Dutta, senior consultant Pediatrics, QRG Health City, Faridabad.

He added that COVID-appropriate behaviour (correct use of face mask, social distancing and frequent hand sanitisation/washing) would be an essential prevention for the third wave. Greater vaccination coverage was the global strategy of prevention.

Anju Wali, medical superintendent, PSRI Hospital, said that for a large and heterogeneous country like India a single vaccination policy was challenging and difficult to implement as well.

“Despite this, we have evolved a robust policy now and with multiple vaccines going to be available soon, the vaccines will be widely available and any issue that would remain would be that of hesitancy against vaccination. On that, more public awareness drives need to be undertaken,” said Dr. Wali.