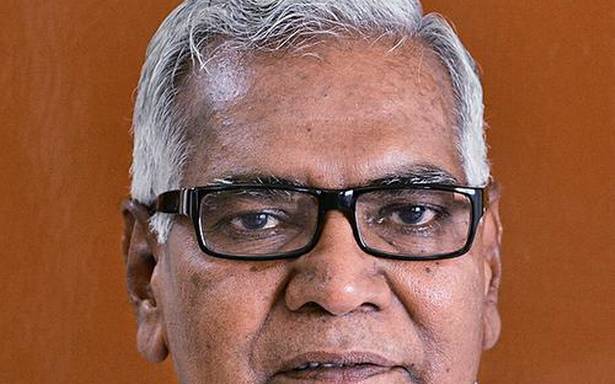 Books gave me a certain strength to hold my head high and never feel inferior to anyone, CPI general secretary tells well-wishers

Friends and admirers of the general secretary of the Communist Party of India (CPI), D. Raja, came together for the release of his book D. Raja in the Parliament, a collection of his select speeches from his 12-year tenure in the Rajya Sabha. The book also records Mr. Raja’s journey from being a daily wage labourer’s son to becoming the first Dalit to occupy the general secretary’s post in the CPI.

Speaking at the function, Mr. Raja said that his mother couldn’t afford to send lunch for him. Seeing his lanky self and knowing well that he was forced to skip lunch, the physical education teacher at his school wouldn’t let him on the ground to play. Mr Raja confessed that he had never played sports in his life. Instead, he would spend time at the school’s reading room. “I started reading books from a very early age. Books gave me a certain strength to hold my head high and never feel inferior to anyone,” he said.

Mr. Ramesh said that it was 25 years since he, Mr. Raja and Mr. Yechury had come together to draft the Common Minimum Programme (CMP) for the two United Front governments in 1996 and 1997. In 2004, too, the same team worked on drafting a CMP for the United Progressive Alliance government. “Comrade Yechury and Comrade Raja have more influence in the Congress party than in their own parties. It shows the power of their thinking and shows the respect they command beyond the Communist parties, too,” Mr. Ramesh said.

Mr. Yechury said that Mr. Raja and he had always worked in tandem within and outside Parliament for four decades now. He recalled how they had worked closely together to move an amendment to the President’s address, which he said was the first defeat of the Narendra Modi government in Parliament. Mr. Yechury said that the functioning of Parliament has been deeply compromised. “If the parliamentary order collapses, then the Constitution is virtually destroyed,” he said.

Many of the speakers, including DMK MP Mr. Siva, said that both Mr. Raja and Mr. Yechury should return to Parliament.