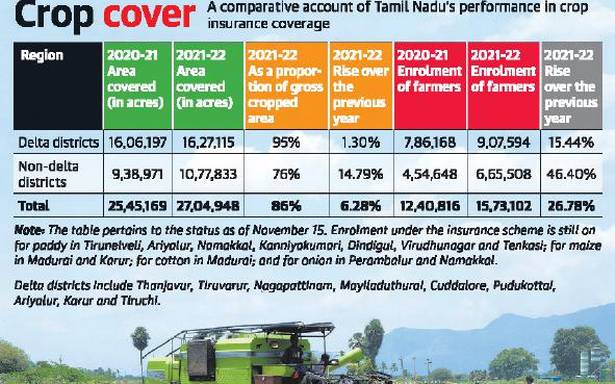 About 6.65 lakh farmers signed up as on November 15, about 2.1 lakh more than what it was on the same date last year

Non-Cauvery delta districts have posted more than 45% increase in the enrolment of farmers under the revamped Pradhan Mantri Fasal Bima Yojana this year over the previous year. As on November 15, about 6.65 lakh farmers joined the scheme, about 2.1 lakh more than what it was on the corresponding date last year.

Around 35% of the farmers enrolled this year are from Tiruvannamalai, where 2.33 lakh farmers have joined the scheme as against 33,356 in 2020. The other two districts with a high rate of enrolment are Ramanathapuram, which has 1.07 lakh farmers, and Villupuram, which has 63,125 farmers, around 72% more than the previous year’s tally.

As for the delta districts, Cuddalore accounts for more than 40% of the enrolled farmers. Over 3.73 lakh farmers have joined the scheme this year, 1.06 lakh more farmers than in 2020. The total number of farmers having been covered is approximately 9.07 lakh against 7.86 lakh last year.

Though Tiruvarur comes next with 1.09 lakh farmers, the figure is lower than that of the previous year when around 1.37 lakh farmers joined the scheme. However, the neighbouring district of Nagapattinam, which is the third, has shown a considerable increase, with about 20,000 more farmers taking the cover. So far, 1.01 lakh farmers have joined the scheme.

A senior official of the Agriculture Department attributes the increase in the coverage in Tiruvannamalai, Villupuram and Ranipet districts to enhanced awareness among farmers who had suffered crop loss a year ago in the Nivar and Burevi cyclones and in the subsequent unseasonal rain.

Madurai is among the districts that have shown a fall in the coverage. This year’s coverage is only 44% of what it was a year ago. It is because “the crops are in good condition”, the official explains. The neighbouring Virudhunagar, too, has seen a drop, but the coverage is expected to go up gradually, with the cut-off date being December 15.

Though Tiruvarur and Mayiladuthurai have reported a fall, about 96% of the area sown this year has been insured, which is “a good achievement”, said the official, pointing to the Union Government’s direction to cover 50% of the area sown. As on November 19, the area insured rose to 27.44 lakh acres and the number of enrolled farmers to 20.81 lakh.

The official said the entire State had been divided into 14 clusters to enable smaller insurance companies to take part in the scheme. The risk-sharing ratio between the State and the companies is 80:20. The Government has set apart ₹2,327 crore towards the scheme.