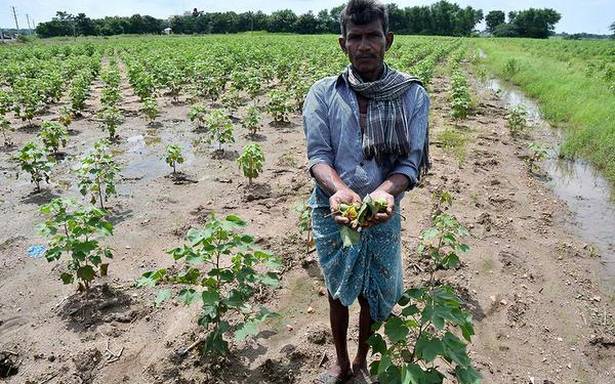 Chances of revival of some crops, getting compensation grim

The recent spell of heavy rains in the State, particularly in the northern parts, has left a large extent of standing crops damaged – inundated/submerged, washed away and silted – leading to distress among a section of farmers with little or no hopes of getting any compensation in the form of crop insurance claim or input subsidy.

Standing crops such as cotton, maize, soybean, greengram, blackgaram, redgram, paddy and vegetables bore the brunt of heavy rains with no chance of revival in case of maize, soybean, greengram, blackgram and vegetables. According to officials of the Agriculture Department standing crops have been badly affected in Peddapalli, Rajanna-Sircilla, Jagityal, Kamareddy, Nizamabad, Warangal, Hanumakonda, Mulugu, Jayashankar-Bhupalapally, Mahabubabad, Jangaon, Bhadradri-Kothagudem and Khammam districts.

Crops have also been impacted in Adilabad, Kumram Bheem-Asifabad, Nirmal, Mancherial and a few other districts. Although the extent of damage is yet to be enumerated, it is estimated that it could be up to 10 lakh acres out of 1.25 crore acres cultivated so far this season.

The chances of revival are limited to crops such as cotton, redgram and paddy, the officials said as the other crops were in the advanced stages of cob formation (maize), pod formation to harvesting (greengram and blackgram) and flowering to pod initiation (soybean). On draining out of fields, cotton and paddy have the potential for revival as they were in the flowering to square formation stage and tillering to panicle initiation stage, the officials explained.

Following the Centre’s decision to trim its share of contribution in the premium payment under the Pradhan Mantri Fasal Bima Yojana two years ago, the State government has stopped paying its increased share of contribution resulting in non-implementation of the crop insurance scheme. Besides, input subsidy given in the event of crop damage due to drought, excess rain and flood has also not come the farmers’ way over the last few years.

Of the 578 mandals in districts other than Hyderabad, 152 have received rain in large excess measure, excess in 258 mandals, normal in 157 mandals and deficient in 11 mandals so far during the ongoing southwest monsoon period.