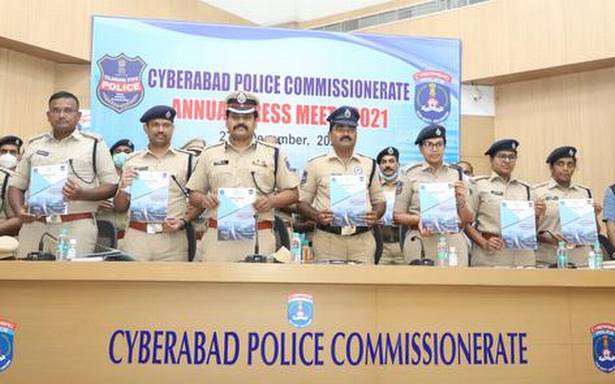 As business moved online due to COVID-19, cases went up by 218 % this year

With technology becoming a silver lining during the COVID-19 pandemic as personal interactions and business moved online, cyber crime cases in Cyberabad police commissionerate increased drastically by 218 % this year when compared to 2020.

While 1,212 cybercrime cases like OLX, KYC, job and loan frauds, were registered last year, the number went up by 3,854 cases this year.

Presenting the crime statistics to the mediapersons at the annual press meet, he said that overall crime in his jurisdiction has seen an increase of 13.24% – 30,954 cases this year as against 27,336 cases in 2019 – during the period at review, while crime against women has seen a slim spike by 2%. Even the economic offences had an enormous increase of 39 % when compared to the lockdown hit 2020.

He said that as many as 354 rape cases out of 356 were found to be ‘technical rapes’ in which the accused are known to the victims. “While 277 cases were on the false promise of marriage, only in two cases the accused were strangers,” Mr. Raveendra said.

Deputy Commissioner of Police (Traffic) Vijay Kumar S.M. said that road accident deaths in the unit had seen a slight dip of 3% when compared to 2020. “A total of 784 deaths happened on various roads in Cyberabad last year and this year the number came down to 759,” he said, adding that most of the road accidents occur between 3 p.m. and 12 a.m.

Mr. Kumar said that 36,512 drunk and drive cases were booked and 3,825 tippler drivers were convicted and 1,356 driving licences were sent for suspension. While 39 persons died in 33 road accidents on Nehru Outer Ring Road, the majority of the accidents took place due to ‘sleep-deprived drivers’.

Of 434 deaths of two-wheelers and pillion riders, 356 deaths occurred as they were not wearing helmets.

Earlier, Mr. Raveendra said that the average response time of Dial 100 calls in the Madhapur zone was 5.6 minutes, and it was 6.5 minutes and 6.2 minutes in Shamshabad and Balanagar, respectively.

When asked about the Biodiversity Park flyover accident which claimed the life of a woman in November 2019, the officer said a charge-sheet was already filed against the accused, Kalvakuntla Milan Rao, who is facing trial now. “We are sure that he will get a conviction in the case,” he said.

Responding to the presence of an Additional DCP rank officer at Raidurgam police station when Sandhya Convention Managing Director Saranala Sridhar Rao was arrested in a cheating case, Mr. Raveendra said that he had already written a detailed report to Hyderabad Police Commissioner to take action against the former. “I am expecting that action will be taken against that officer,” he said and restrained himself from disclosing the name of the officer.

So far 13 cases, including unnatural offences, was registered against Sridhar Rao in the last couple of months. “In two cases he was arrested and later approached High Court,” he said.

He further said that they are conducting forensic auditors in the socialite Shilpa Chaudhary cheating cases to know if there are any hidden assets.

When asked about comedian Munawar Faruqui show, which BJP requested police to stall, the Commissioner said “so far no one has approached us for permission to his show.”