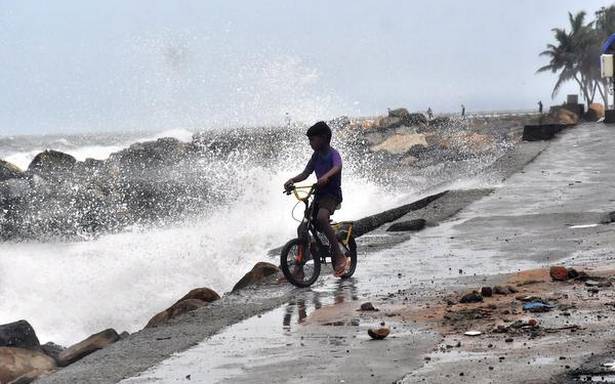 A high-wave warning has been sounded for the Kerala coast till Tuesday night in view of the rough weather in the Arabian Sea.

The Kerala coast from Pozhiyoor to Kasaragod is likely to be lashed by high waves till 11.30 p.m. on Tuesday, the India Meteorological Department (IMD) noted.

Kollam, Alappuzha, Ernakulam, Ponnani (Malappuram), Kozhikode, Kannur and Kasaragod are likely to experience intermittent surges, according to a joint bulletin issued by the IMD and the Indian National Centre for Ocean Information Services (INCOIS).

With Cyclone Tauktae moving further north, the intensity of rainfall in the State has decreased further. However, northern Kerala districts are likely to get isolated heavy rainfall till Tuesday. Malappuram, Kozhikode, Kannur and Kasaragod are on yellow alert.

The prohibition on fishing activity along the Kerala coast will continue until further notice, the Kerala State Disaster Management Authority said.