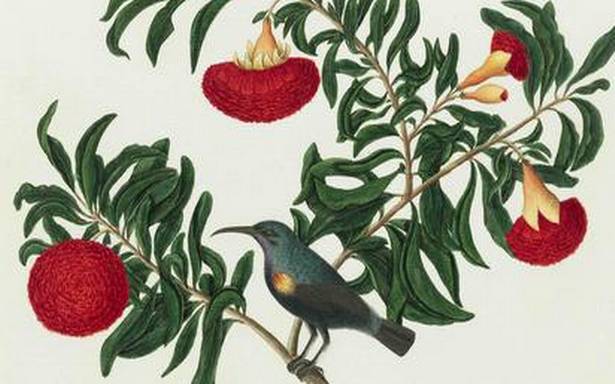 A painting of a pair of red avadavat, also known as red munia or waxbill shown on a branch of crepe jasmine plant looks terrific. There are other colourful birds, like the purple sunbird perched on the branch of a pomegranate tree. “The paintings of waders are appealing and sensitively done,” says Giles Tillotson, Senior VP, Exhibitions and Publications at DAG about the ongoing exhibition at DAG, The Claridges, New Delhi.

Curated by Tillotson, the exhibition presented by DAG art company, features 125 Company paintings of Indian birds from its gallery collection that honour some of the unknown Indian masters commissioned by the East India Company in the late 18th and early 19th centuries. “It is an album of paintings on Nature made in Kolkata around the 1800s and collected by a European patron,” he explains.

Birds have always featured in Indian art. Some geese, endowed with luxuriant crests, appear in the Ajanta murals. Naturalistic portraits of recognisable species reached perfection in Mughal art under Emperor Jahangir. Connected developments emerged out of that Mughal practice in the late 18th century in Lucknow and Kolkata, where artists worked on commissions from European patrons. The efforts of General Claude Martin, Lady Impey and William Roxburgh and their artists inspired others, giving rise to a larger body of Company painting dedicated to natural history. “DAG has been an ardent champion of Indian art over the last 25 years. Our partnership with the Wallace Collection in 2019 for Forgotten Masters: Indian Painting for the East India Company highlights our commitment to the oft-neglected genre of Company paintings, a commitment we are taking forward by showcasing Birds of India,” says Ashish Anand, CEO and MD of DAG.

The paintings belong to four groups — 99 works from Cunninghame Graham (1800-1804), the c. 1810 album of birds from north-east India, the Faber album from c. 1830 in which the artist’s observations contribute to the ornithological studies expounded in this exhibition, and the four folios by Chuni Lal of Patna — the only artist to be identified, from the never-seen-before 1835 Edward Inge album. “These four groups illustrate the development of Company paintings through a single genre. The birds depicted in this exhibition include raptors, game birds, coastal waders and many woodland and forest birds, some familiar and several that are now scarce,” says Tilloston.

However, the collection is not comprehensive. While there are birds of prey, game birds, waders of different kinds such as sandpipers, red shank, green shank, and song birds, some of the large water birds like egrets, storks and herons have been left out.

An accompanying catalogue of the 125 paintings in the form of a book gives a wide-ranging study of birds through Company paintings. “These are slightly different from the Indian paintings. It is done on European paper, imported from Britain, and supplied by the patrons. The pigments used are western water colours. The works signify a hybrid Indian art that combines the delicacy and care of Mughal atelier-trained artists and refinement of European art, a style unique to the Indian subcontinent whose patronage was almost entirely British,” says the curator.

A chapter in the book on ‘John Latham’s world of birds’ by Aditi Mazumdar talks of the contributions of John Latham, the British Ornithologist of the 19th century, and an early writer on birds of the world, who published several works. Most paintings have inscriptions on the bird in English such as Spotted Dove of Latham and Indian Kingfisher of Latham.

“ I have re-identified the birds as accurately as I can and the captions give information on what the bird is, its Latin name, and details on whether it is a resident bird or winter visitor,” say Tilloston hoping the exhibition brings more children to the gallery.

The exhibition is on till October 6 and you can view it at https://dagworld.com/Birds_of_India/