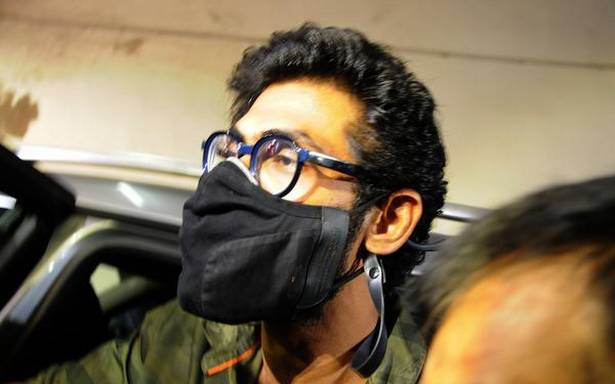 Actor among 11 other film personalities quizzed

Telugu actor Rana Daggubati appeared before the Enforcement Directorate (ED) here on Wednesday after being summoned as part of the ongoing money laundering probe in connection with a high-end drugs racket busted in the city in 2017. The actor along with a chartered accountant arrived at the ED office around 10 a.m. He was questioned by ED officials till 6 p.m.

While the actor was inside, the ED authorities brought Kelvin, who was among the prime accused in the drugs racket. The ED authorities remained tight-lipped on the outcome of the interrogation of Kelvin.

On July 2, 2017 the Excise department had busted a drug racket by arresting a three-member gang including Kelvin Mascrenhas, a musician, for allegedly peddling narcotic drugs such as LSD and MDMA. Subsequently, several cases related to the drug trafficking were registered and over 20 people were arrested. According to the officials, the gang’s clientele included nearly 1,000 customers including students of city-based schools and colleges, people associated with Tollywood, senior officials of MNCs and employees of IT firms in Cyberabad.

The names of some Tollywood personalities surfaced during the interrogation of persons arrested in connection with the drug bust.

A Special Investigation Team (SIT) of Telangana’s Prohibition and Excise department, as part of its investigation had also probed the alleged drug-links with Tollywood, and had then questioned 11 people connected to the Telugu film industry including actors and directors besides the driver of one of the actor and had also collected hair and nail samples. Since August 31 this year noted filmmaker Puri Jagannadh, actresses Charmee Kaur and Rakul Preet Singh, actor Nandu have appeared before the central agency. The SIT quizzed them to ascertain if they had any links with the racket as consumers or suppliers, or with those arrested.