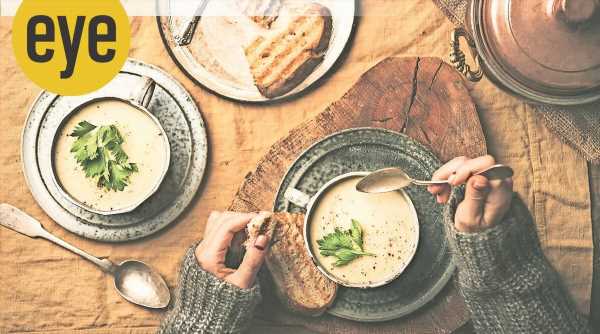 In times of unusual stress, such as the ongoing COVID-19 pandemic, we often seek solace in food that is familiar and nourishing. Why is it that we find certain kinds of food more appealing than others in times of unease? 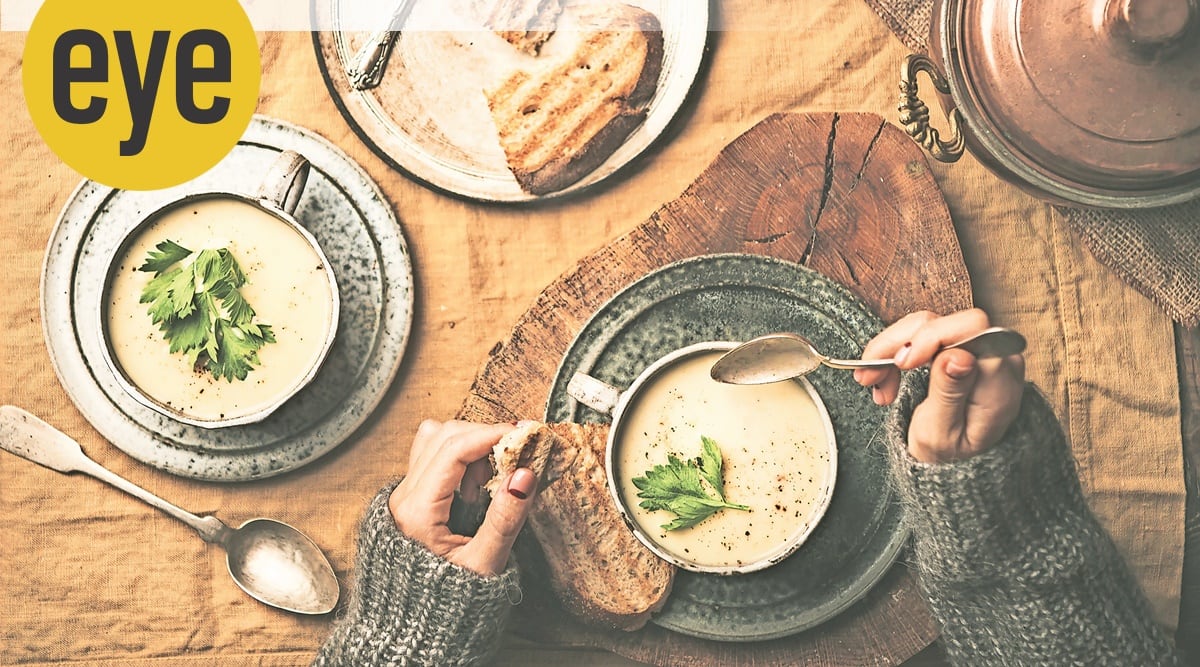 Julia Carmen Desa has just made soup for lunch. The soup is made of winter vegetables like bathua (Chenopodium album), spinach, radish and carrots; there’s some cheese in it, as well as coconut milk, coriander roots and a pinch of Madras curry powder. Desa will serve it for lunch to her family, along with some garlic bread. “If I had added chicken, it would have been better, but it’s quite good even without it. It’s simple, warm and comforting,” Desa says.

At TRES, the modern European restaurant in Delhi’s tony Lodhi Colony, where she is chef and co-owner, the food is a lot more finessed: sweet potato with caramelised yogurt; grilled smoked paprika garlic tiger prawns with potato leek foam. While she needs to taste everything that is made in her professional kitchen, besides eating at competitors’ restaurants, Desa assures that at the end of the day all she wants is some hot rice and fish curry. “That’s the Goan in me,” she says.

Desa isn’t alone in looking at the familiar and comfortable to tide over stress. Over the last 10 months, as pandemic-related anxieties gripped us all, many of us sought solace in food. As we tracked the R-number of the coronavirus, grappled with news of pay cuts and layoffs, we longed for the simple dals and khichdis of our mothers and grandmothers. When it became clear that we might not be able to meet our families for a while, we sought to fill our houses with the aroma of fresh rotis and breads, reminders of what it meant to have a full stomach and a happy heart. We Googled recipes for no-churn ice creams and pressure-cooker cakes to satiate our sugar cravings and lull us through anxiety-filled nights. The recipes we looked up online are, in fact, a good indicator of what was on our minds in 2020: according to Google’s “Year in Search 2020”, nine of the top 10 searches for recipes last year was for carb-heavy and deeply satisfying food, such as sourdough bread, naan and the Greek pastry, ekmek.

In their satiety value, their familiar textures and flavours and their unfailing ability to calm our hearts and minds, these are what we would broadly call “comfort food”. The term itself, according to Michael Owen Jones and Lucy M Long in Comfort Food: Meanings and Memories (2017, University of Mississippi Press), may have first appeared in print on November 6, 1966, in the Des Moines Register. There is some dispute about this history, but the origin of the term is undeniably American, as the Oxford English Dictionary stated when it added a definition in 1997: “food that comforts or affords solace; hence, any food (frequently with high sugar or carbohydrate content) that is associated with childhood or home cooking”.

But does comfort food, indeed, comfort? Research has revealed the physiological and psychological effects of consuming carb- and/or sugar-heavy food, often described as “comfort food”. According to a 2008 paper by American psychologists Joyce A Corsica and Bonnie J Spring, a two-week study they conducted “supports the existence of a carbohydrate-craving syndrome in which carbohydrate self-administration improves mildly dysphoric mood”. A 1997 study by American psychologist Larry Christensen had put it more bluntly: “…it is apparent that carbohydrate consumption is relevant for individuals experiencing symptoms of emotional distress, particularly symptoms indicative of depression, and that the individuals with depressive symptoms show a preference for sweet simple carbohydrates.” This happens because carbohydrates increase the availability of the amino acid tryptophan, which creates niacin (vitamin B3). Niacin is essential for the creation of the neurotransmitter serotonin, which besides helping to regulate sleep and digestion, is also a natural mood stabiliser. In a nutshell, carbohydrates do help in improving mood.

Not surprisingly, then, emotional distress — as has been widely experienced during the COVID-19 pandemic — is a natural trigger for many people to seek solace in food. This is what studies conducted last year revealed: a lot more people resorted to “emotional eating” to cope with the stress of losing a job, worrying over loved ones or the boredom of staying cooped up indoors. A study by a group of Italian researchers, led by clinical nutritionist Laura Di Renzo, said that 86 per cent of the people they surveyed had reported that isolation, lack of stimuli, boredom and change of food routine led them to abandon any previous inclination to control their diets. Similarly, a Canadian study, led by neuroscientist Melissa J Chee, on the “pandemic baking” phenomenon revealed that one of the preferred strategies for coping with reduced hours and being laid off was to eat.

Most research that links mood to food approaches the subject from the perspective of obesity or cardiovascular health. But this is just one way of understanding comfort eating. As Sangeeta Khanna, food consultant and author of Pakodas: The Snack for All Seasons (2019, Westland) points out, “Food is not the only component of ‘comfort food’. It’s also about the particular time and place or situation that you associate that food with.” In Khanna’s case, roasted baby potatoes and peas remind her of her childhood with her grandmother who, during winter, would roast these foods on a bhursi, a small earthen heater, and would hand them out to the children who gathered around her to listen to stories.

It’s not just a happy childhood that gilds certain memories and makes us reach for the food associated with them. “I know people who are self-made and for whom comfort food recalls the simple meals that they would eat during their struggling days,” says Khanna. Here, the comfort derived from a hard-earned meal is thrown into sharp relief by the desperation of hunger — and the memory becomes a source of future comfort. “When I was about 16 years old, I heard about a neighbour’s father who could only afford to eat rice with chilli-garlic chutney when he was younger and poorer. Years later, even after he was very well-off, it was his comfort meal,” she says. That it’s not just the food by itself which elevates mood is backed by research. In a 2005 article, ‘Comfort Foods: An Exploratory Journey into the Social and Emotional Significance of Food’, published in the journal Food and Foodways, medical sociologist Julie L. Locher wrote about a survey which had led her and her colleagues to establish four categories of comfort food based on the emotional and social needs they fulfilled: nostalgic foods, which are identified with a particular time and place in one’s history; indulgence foods, which are defined in terms of how expensive they are or how rich in calories; convenience foods, which give effortless gratification by how conveniently available they are; and physical comfort foods, which offer comfort through their physical attributes or how they physically affect the consumer.
Of these four, the category that is most relevant for understanding what drove comfort eating in 2020 is the first one. Locher’s study showed that nostalgic foods were strongly associated with memories of being cared for, sharing food with significant others during special occasions or preparing the food with others. This is borne out by the results of a consumer trends study (The State of Snacking Report) by the global snacks manufacturer Mondelez International in India in 2020. According to this study, conducted from October 6 to 20 and released in December, 88 per cent of 555 Indian adults surveyed said that they snacked more during the pandemic than in 2019, with comfort being the No. 1 driver. About 81 per cent said that buying and eating snacks brought back good memories, while 95 per cent saw snack time as a time for connecting with others, either by making a snack together (55 per cent) or eating a snack to celebrate a special occasion (54 per cent). “The interesting thing was how snack time became a ritual for comfort,” says Anil Viswanathan, senior director, marketing (chocolates), Mondelez India, “People would set aside time for it, as a break from work, so that they can sit with the family and eat. This was also the case for those who would snack by themselves: they would find comfort in eating during their break.” But, perhaps, the most interesting thing about comfort food is that it’s a concept that’s recognised widely enough that one never needs to explain what it is, and yet, it manages to encompass a stunning variety of foods — from soups, stews and hearty meat dishes, to chips, cookies and cakes. Even as we seem to instinctively understand why a friend describes chocolate ice cream as her “comfort food”, we might ourselves find succour in something as completely different as rice and mutton curry. It comes down to individual and cultural context. “Every society has its equivalent of chicken soup for the soul,” says food historian Pushpesh Pant. “For me ‘comfort food’ means a simple, no-frills wholesome meal that not only nourishes the body but also revives the spirits evoking the nostalgia of happy times spent with family.”
While comfort food is supposed to provide a personal anchor in a chaotic world, as a broad concept it is constantly shifting and changing. Pant points to the example of a one-dish meal like jaula/chhansia (rice cooked with curds or buttermilk with just a pinch of turmeric and salt), which was traditionally prepared in the hills of Uttarakhand for the infirm or convalescent. “I don’t think comfort foods can remain static. With changing lifestyles, convenience cooking and — more important than anything else — the breaking up of joint families, few in the younger generation have memories of consuming food prepared for them to cheer them up. Aspirational foods like soups from sachets, momos, two-minute noodles etc. have pushed traditional comfort foods off-stage,” he says, over email.

It has been pointed out that our present world is such that we now resort to comfort eating more than ever in the past. In her essay on comfort food for the Encyclopedia of Food and Culture (2003, Charles Scribner’s Sons), Locher wrote, “Conditions of postmodern societies present individuals with stressors that are often beyond their control. At the same time, societies have become consumer-oriented, and individuals have become more defined by the objects they consume…eating comfort food may be a means of maintaining control over the self when all else seems out of control.” The bad news is that, at present, with news of fresh lockdowns and mutant coronavirus strains, it doesn’t seem like things will be under control any time soon. The good news? We can always eat some freshly baked bread to comfort ourselves.