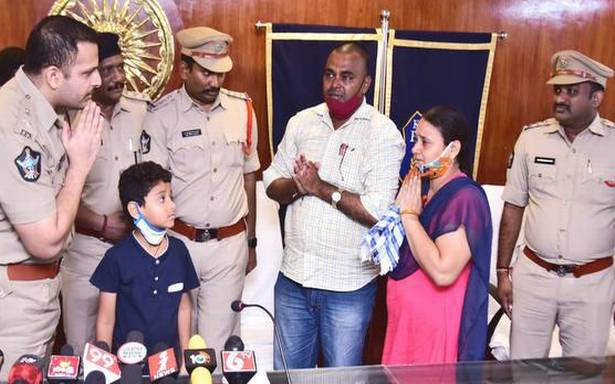 In a swift operation, the Krishna district police rescued a seven-year-old boy named R. Mahijanath, who was allegedly kidnapped by a degree student at Nagayalanka town, for a ransom of ₹1 lakh.

Police heaved a sigh of relief after the boy was safely rescued within four hours. The boy was handed over safely to his distraught parents at the District Police Headquarters on Monday.

A youth identified as Hemanth, hailing from Marripalem village of Nagayalanka mandal, was arrested for the kidnap. Hemanth is a second year graduation student and had suffered heavy financial losses after betting money on cricket matches, Superintendent of Police (SP) Siddharth Kaushal said.

Disclosing this to reporters here, the SP said that Hemanth kidnapped the boy from the latter’s residence on Sunday evening. The boy’s father R. Ratnagiri, a schoolteacher, immediately lodged a complaint with the police.

“The kidnapper demanded a ransom of ₹1 lakh to release the boy and threatened to kill him if his demand was not met. The boy was in shock when he was rescued. There were no signs of abuse,” the SP said.

“Police formed 20 teams, cordoned off all the roads leading to Nagayalanka and Avanigadda, and conducted vehicle checking. Based on technical evidence, police traced Hemanth to an isolated place,” said Mr. Siddharth.

A team led by Avanigadda Deputy Superintendent of Police (DSP) Md. Mehaboob Basha rescued the boy and took the kidnapper into custody. During questioning, the accused confessed to kidnapping the boy for ransom. The accused had taken a house on rent where he planned to detain the boy after kidnapping him, Mr. Basha said.

Emotions ran high as the boy’s parents wept on reuniting with him. They thanked the police for rescuing their son within hours.

The SP, DSP and Avanigadda CI B. Ravi Kumar and Nagayalanka SI K. Srinivas gave chocolates to the boy. Mr. Siddharth appreciated his team for cracking the case within a short span of time.

An investigation is on to find out how the accused managed to kidnap the boy and cover his tracks, albeit for a short period, the SP said.