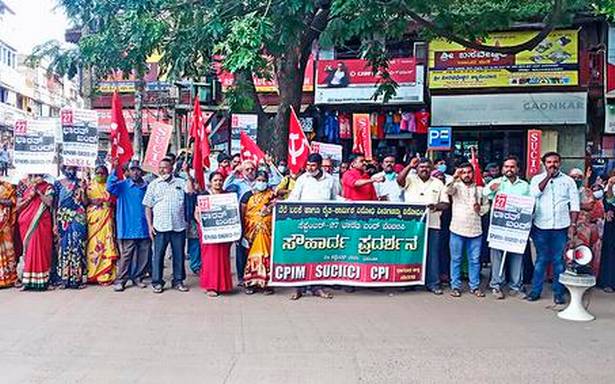 Raising their voice in support of the Bharat Bandh call on September 27 seeking repeal of pro-corporate, anti-farmer farm laws, members of Left parties staged a demonstration in Dharwad on Friday and appealed to the people to support the bandh in the interest of the future of the country.

Addressing the protesters, District Secretary of CPI(M) Mahesh Pattar said that over 550 farmers organisations in the country which had united under the banner of Samyukta Kisan Morcha had given call for the bandh and various organisations of workers, students, youth, women, Dalits and Left parties had extended support.

He said that in Karnataka, various organisations had united under the banner of Samyukta Horata-Karnataka and had given call for a Karnataka Bandh in support of the farmers. The Centre should not be allowed to go ahead with anti-farmer farm laws being imposed on the farmers at the behest of corporate companies. Residents of Dharwad should come out in support of the bandh, he said.

District Secretary of SUCI(C) Ramanjanappa Aldalli said that the questions being raised by the farmers were rightfully and justified. The Centre was imposing pro-corporate, pro-privatisation laws on the nation, thereby leaving little scope for protection against loot by the private sector. The farm laws should be withdrawn immediately and new laws that protect the interests of the farmers and the people should be implemented, he demanded.

Mr. Ramannjappa too strong exception to the statement of chief minister Basavaraj Bommai that the farmers protest was sponsored one. He said Mr. Bommai’s statement was an indication of his indebtedness for being made the Chief Minister of the State and he reminded everyone about “his master’s voice”.