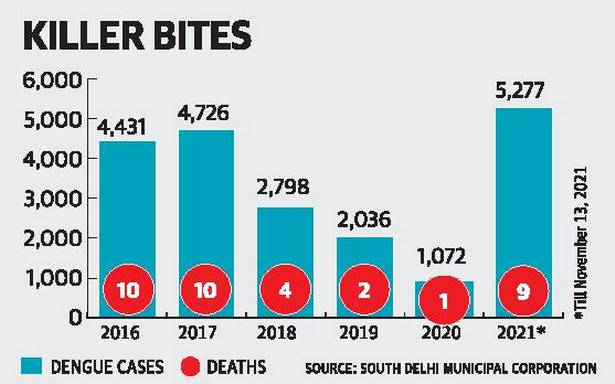 The Capital reported 2,569 cases of dengue over the past week (till November 13), taking this month’s caseload to 3,740, a civic report said on Monday. This takes the season’s total to 5,277 cases, the highest since 2017, while the death toll remains at nine.

The cases recorded last week are almost equal to the total number of cases reported till November 6: 2,708.

The Hindu on November 14 reported that only seven city hospitals had recorded more cases than the Government’s official figure till November 6, which included patients from outside Delhi. While the official count was 4,362 cases, the data provided by sources from the seven hospitals, including Safdarjung Hospital and Lok Nayak Hospital, put the total at over 4,600 cases.

North Delhi reported the highest number of cases over the past week at 808, followed by south Delhi with 781 cases.

Officials from the South Delhi Municipal Corporation’s (SDMC) public health department said “many hospitals” are reporting “backdated and repeated cases” after the Delhi Government’s decision to notify vector-borne diseases under the Epidemic Diseases Act. They said that “heavy and late rains” in September and October had also led to an increase in “mosquito breeding causing dengue”.

“Dengue has a cyclical trend and there is a surge in cases every four to five years. A case spike in the entire National Capital Region is leading to more patients coming to Delhi hospitals due to better treatment facilities. After dengue was made notifiable, reports of cases are received from the Delhi Government and not directly from hospitals,” the SDMC officials said, adding that there is “no backlog of cases” in the civic body’s public health department.