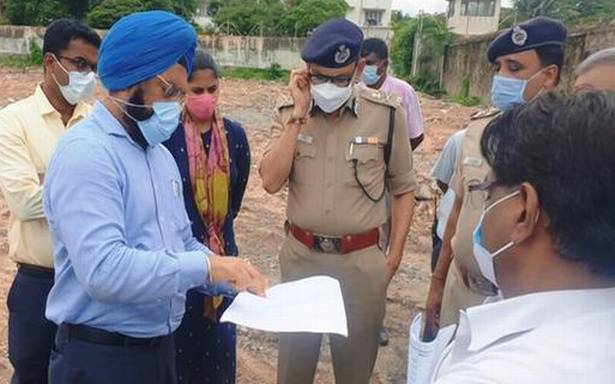 A new design of the proposed state-of-the-art fish market along Marina Loop Road is expected to be finalised shortly. The new design will incorporate various aspects, including a sprawling parking lot for at least 100 vehicles, water supply, modern waste management facility and smart storage spaces for retail fish vendors.

Following the directions of the Madras High Court and advice from Municipal Administration Minister K. N. Nehru, Greater Chennai Corporation Commissioner Gagandeep Singh Bedi and Commissioner of Police Shankar Jiwal inspected the Marina Loop Road on Sunday, to explore the possibility of shifting the fish vendors to a new market near behind Santhome Church.

During the initial meetings with fishermen a few years ago, the Corporation officials had said that the new fish market would be a temporary structure made of tin sheets on a two-acre area, to be modernised later.

The fish vendors along the stretch from Light House to Srinivasapuram opposed the project as they were not convinced about its utility and demanded shops along the Marina Loop Road without any displacement.

After the Madras High Court directed the Corporation and the police to evict the fish vendors, the civic body had started exploring options to convince the fish vendors by altering the design of the proposed market, making it more attractive for the fish vendors as well as their customers.

Suggestions have been sought from experts and officials on innovative designs for the proposed fish market. The final design of the market is expected to be cleared after approval from the State government. A Coastal Regulation Zone clearance is also needed.

Some experts have suggested a state-of-the-art retail space with adequate water supply, storage facility and waste management system for each vendor.

On Sunday, civic officials led by Mr. Bedi proposed a design with parking space for at least 100 vehicles in the proposed fish market.

Some experts have suggested the development of air conditioned modern fish market, similar to coastal cities such as Sydney and Dubai, with space for all the 350 fish vendors who will be displaced from the Marina Loop Road. But the Corporation has rejected the proposal for an air-conditioned fish market.

“We will consult the Fisheries Department for the designs. We have told them today to get the designs done. We don’t want to put up an air-conditioned market as of now. Open skylight will make the market odour free. It is not the richest of the fishermen who will have their shops there. It will be the local fishermen. Let us see. Of course, we will consult the community also,” said an official of the Corporation.

Suggestions have been made for exploring the possibility of getting additional land near the two-are area of TNSCB to develop a better designed market. A final decision is expected to be taken shortly.