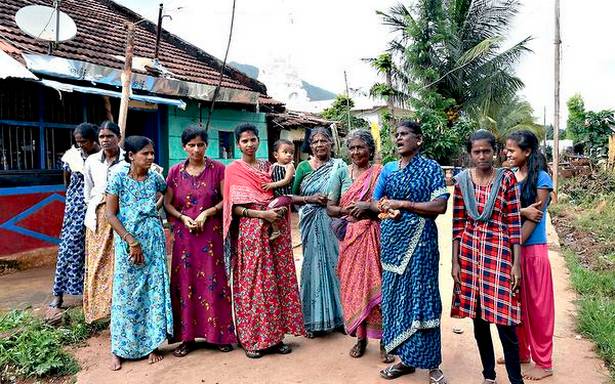 Residents of Kadur oppose opening of a bar in their village

Women residents of Muslapura Hatti in Kadur taluk are on the warpath against the opening of a liquor shop in the village, despite police action against them and what they call mounting pressure to weaken their agitation.

“Let the police arrest all of us but we will not allow a bar to come up in our village. The police and senior officers are in favour of the bar owner; nobody is listening to our plea,” an elderly woman at Muslapura Hatti, a village in Emmedoddi gram panchayat, told this reporter on Tuesday.

For the last two months, the women have been fighting against the opening of SunMoon Bar and Restaurant in the village. “We staged a dharna in front of the Deputy Commissioner’s office in Chikkamagaluru, but the the officer did not meet us. We were told that he would come to our village and listen to our problem. So far, he has not. When all our peaceful efforts against the shop failed, we went and ransacked the establishment,” admitted another woman. She was referring to the protest in the village on November 12 that turned violent and left a few women injured.

After a series of protests, the licence-holder assured them that he would not open the bar, in the presence of police officials. But, when the women noticed someone had already started business that day, they gathered and took the employees hired by the license-holder to task. As they did not get a satisfactory answer, they damaged the furniture and broke the window panes of the building. The employees also retaliated, leaving a few women injured.

Following the incident, Mahanthesh, an employee in the bar and restaurant, filed a complaint against 41 people with the Kadur police. The police took the injured women from the hospital into custody, allegedly without allowing them to undergo treatment. They were released after the villagers staged a protest in front of the station that evening.

The police went to the village early on Monday and arrested five people, including three women again. “The police broke open doors and took away people, who were asleep,” alleged an aged woman. Following this, many women fled the village to avoid arrests.

When The Hindu visited the village on Tuesday, there were hardly any men. “Some people have approached advocates to secure anticipatory bail,” said a resident, who wished not to be named. The arrested Premabai, Janibai, Sheelabai, Mallesh, and Kiran have been remanded to judicial custody. “Whatever may be the turn of events, we will fight against the bar, as we are more concerned about the health of our men and children,” said a young lady.

At present, there is no bar near the village. Those wishing to get alcohol have to go to Kadur, about 15 km away. “If the shop opens near the village, those addicted to alcohol will spend more money on liquor. We are all working people, who earn a couple of hundred rupees after a day’s hard labour,” said a woman, adding that her children’s education would be in peril.

Chikkamagaluru Superintendent of Police Akshay M. Hakay defended the police action. “We have not violated any rule in arresting the accused. We will act as per the law,” he said. However, residents allege that the local police had been acting at the behest of bar owners, who enjoy the support of politicians and elected representatives.