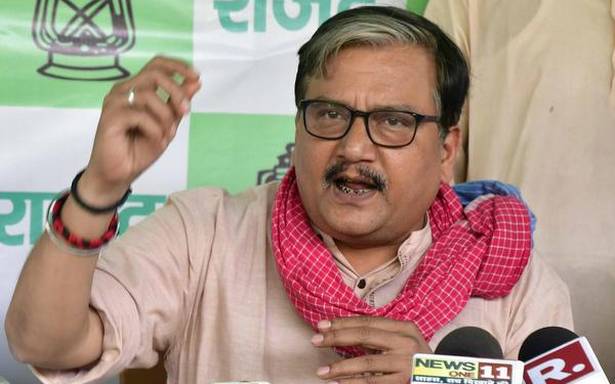 Disruption cannot be a permanent Parliamentary strategy for the Opposition, according to senior Rashtriya Janata Dal (RJD) leader Manoj K. Jha. In an interview, he talks about the need to prioritise people’s issues such as inflation and unemployment. The floor management cannot be dictated by the immediate interests of any one political party.

The monsoon session saw a series of disruptions, with very little constructive discussion. Do you expect a similar scenario in the winter session of Parliament?

Neither would I expect nor would I desire on behalf of my party that the winter session should go the monsoon session way. It was not only working hours that we lost, but we also lost opportunities to discuss important issues.

The late Arun Jaitley had described disruptions as a valid Parliamentary strategy. I believe, disruptions should only be episodic in nature for a day or for a few hours. If you adopt it as a permanent strategy, then it will harm the very idea of Parliamentary discourse. Our party’s position is clear that there should be more deliberations over key legislations. There should be deliberative business along with legislative business. If possible, we must work extended hours during the winter session to make up for the time we have lost.

There is a growing feeling that the Trinamool Congress party led the disruptions in the last session, running away with the Opposition agenda. Do you share the sentiment?

I wouldn’t say they ran away with the agenda, though I will say that any political party should rise above their numbers and look at the larger picture. We [the RJD] may have only five members, but we may bring a set of issues which might be very, very important. For this, we need to have coordination among the Opposition parties that transcends the barriers. I am not denying that there are barriers. I wouldn’t blame anyone in particular, but I would rather say that many times the political parties may have a misplaced sense of priorities or proportion. Pegasus was very important but so was the case of unemployment, which is spiralling out of control. Yet, we could not debate it.

You say Parliament needs better coordination, but in the last session the Opposition met every day. Was that not enough?

We need to have better mechanisms. And the mechanism should not be guided by the immediate interests of any political party. It should be guided by what we owe to Parliamentary democracy, why it is important to bring the people’s agenda on the floor. I know this government is very vindictive in nature. I know we need to talk about the use of the CBI, the ED and the I-T Department. But, at the same time, we must also realise that inflation has severely hit people. COVID-19 second wave has taken away the livelihood of thousands of families. If these issues don’t find a space in our scheme of things, people will not forget us.

In the last few months, the Opposition unity seems to be in disarray, many Congress leaders left the party to join the TMC. In Bihar, we saw the Congress and the RJD part ways for the by-elections. How will this play out in future?

I will answer the second part of your question first. Our parting ways with the Congress was episodic in nature. We had our differences over one Assembly constituency Kusheshwar Asthan Tejashwiji was very keen that Musahar, the most marginalised of the Dalit community, must be represented, but the Congress was not on board. When we are in coalition, it is only natural to have some differences every now and then, but mature minds deal with them.

As for the first part, every political party has the right to enhance its footprint. But, keeping 2024 in mind, you have to see this within a larger perspective of keeping the people first. This kind of politics may not be helpful. You cannot deny that the Congress has a footprint of 225 Lok Sabha seats. Each of us has our regions of strength… the TMC in West Bengal, us [the RJD] in Bihar and the DMK in Tamil Nadu. Larger Opposition unity would mean jettisoning our respective ego. Let’s not enhance our footprint at the cost of Opposition unity; sooner or later, I believe all Opposition parties will understand this.

So, are the RJD and the Congress back together?

I will repeat what my president Lalu Prasad Yadav said. He was in communication with Soniaji. Lalu and Soniaji’s relationship is the foundation of our alliance. We have only been saying, “Look, you are a national party, but in States where the regional parties are strong, let’s evolve a mechanism whereby the driving seat is given to the regional party and you become a co-traveller.”

When I say ‘driving seat’ and ‘co-traveller,’ it is not undermining any political party, it is just to acknowledge the electoral strength of the allies. Once we accommodate this kind of arrangement, the Opposition unity will be much more of a reality than the fiction we see now.