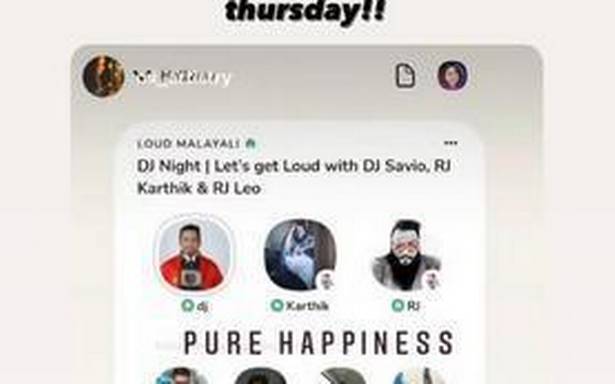 As a DJ session in Loud Malayali, a voice chat room called a club, in the new social media sensation Clubhouse hit a crescendo, a listener who tuned in from UAE desperately wanted to shake a leg notwithstanding the fact that he was in a two piece suit far from a dance floor.

So he crashed into his car, rolled up the windows, cranked up the voice of the bluetooth speaker and tapped the foot wildly, or as much the cramped space allowed.

As it turned out, he wasn’t alone as hundreds of Malayalis from across the world had similar adrenaline rush listening to remixed Malayalam and Bollywood songs in the DJ night moderated by Disc Jokey Savio and Radio Jockeys Karthik and Leo Paul on Monday. The session was a mix of playing tracks and interactions with listeners and lasted over two hours, even past midnight.

“The response was phenomenal as was evident from the Instagram stories and Facebook accounts. At a time when people were locked up in their houses, we wanted to make them feel good once again,” said Savio who had been into DJing for 22 years.

What gave the event a real lively experience was the quality of the sound created using a club management software. “The sound quality was phenomenal when connected to headset or bluetooth speakers. It was like a DJ session coming alive at home and in these trying times it was a great stress buster,” said Karthik.

Loud Malayali was born almost accidentally just two days before its successful debut. Leo, an RJ in Qatar and now in Kerala, hit upon the idea of getting on Clubhouse with something different, which he shared with his friend Karthik. Together they approached Savio and everything worked out like a song.

“Serious discussions were the trend in Clubhouse. But we want to set the trend with entertainment-heavy events,” said Leo.

They are now planning to hold thematic DJ sessions on Mondays, Thursdays, and Saturdays. The next session is dedicated to Tamil ‘kuthu’ songs and entails a DP (display picture) contest aimed at making the interactions more lively. Listeners are encouraged to post DPs on social media dressed up in attires fit for ‘kuthu’ songs and publish Instagram stories so that there is more to look forward to than merely listening.