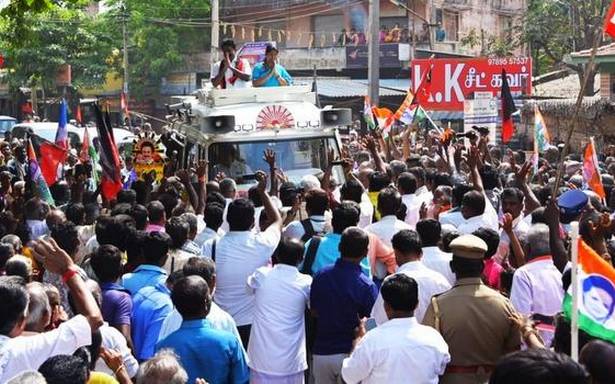 issue with Chief Minister, Edappadi K. Palaniswami, on development of Information Technology sector in Tamil Nadu, Dravida Munnetra Kazhagam MP, M. Kanimozhi, said that it was M. Karunanidhi-led DMK Government that first formulated the policy on IT sector way back in 2000.

“The first policy on IT sector in the whole of India was formulated by DMK Government in 2000,” she said.

Stating that now many students are pursuing computer science course in the State only as the DMK Government was first to think about bringing a policy and developing the IT sector, she said.

She was campaigning for DMK candidate for Rajapalayam Assembly constituency, S. Thangapandian, here on Friday.

She refuted the recent claim made by the Chief Minister, who said that former Chief Minister, Jayalalithaa brought many IT parks in the State that gave employment to the IT professionals.

“Karunanidhi built the Tidel Park at a cost of ₹340 crore in Chennai. He also created an IT Park on 1,000 acres in Siruseri. Many of the IT Parks in several cities like Madurai, Coimbatore, Tiruchi, Tirunelveli and Dharmapuri were created by Karunanidhi. The present Chief Minister does not even know all these facts,” she said.

The AIADMK Government has failed to provide employment to the people in the last 10 years, though every house has educated youth in the State. “ The Government is not bothered about the common man, but shows interest only in filling their coffers,” she said.

The present Government was marching fast only in corruption, Ms. Kanimozhi added.

Taking on the AIADMK candidate and Minister for Dairy Development, K. T. Rajenthra Bhalaji, the MP said that he had to shift the constituency after he failed to do anything constructive in Sivakasi Assembly constituency.

She charged that a disproportionate assets case was pending against him, besides there were several corruption charges in Aavin.

“A journalist was brutally attacked after he wrote against him,” she recalled.

Mr. Thangapandian, who had brought many development projects to the constituency as an MLA from the opposition party, will bring more welfare when he became MLA of the ruling party.