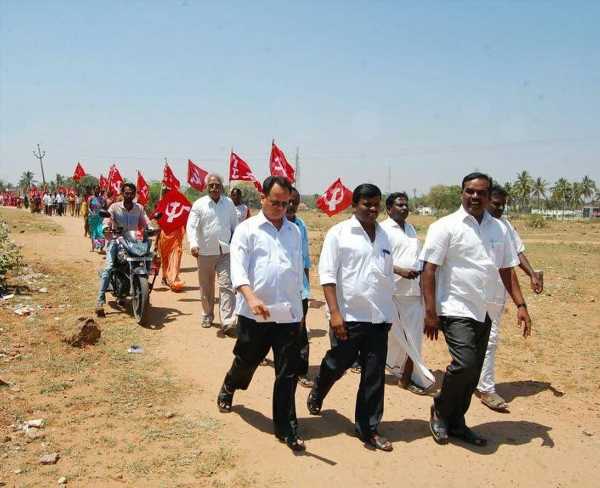 ‘The main reason is ‘they’ do not want to see Dalits especially in the morning!’ 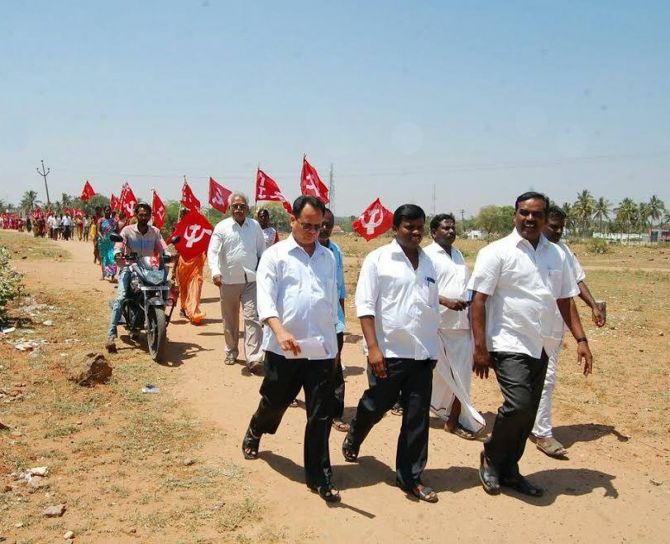 Perhaps not many in India are aware that walls have such names, and they do exist even in the second most literate state in India — Tamil Nadu.

On October 3, 2022, one such 7 feet high wall separating a Dalit colony and a temple belong to ‘other communities’ was demolished in a village in the Thiruvalluvar district in Tamil Nadu.

“We will have a society without untouchability walls only when people demolish the walls built in their minds!” Samuel Raj tells Rediff.com‘s Shobha Warrier. 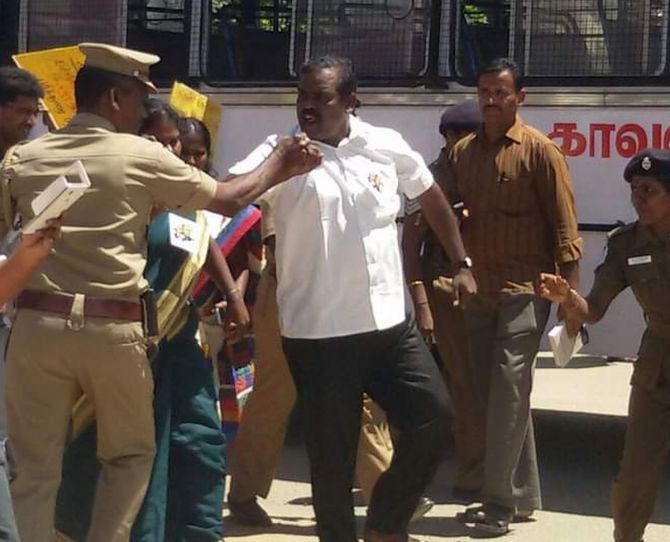 My question is in the background of the caste wall that was demolished recently in a Tamil Nadu village. Tamil Nadu is the land of Periyar. It is where the Dravidian movement happened. It is also the second most literate state in the country. Why is it that caste discrimination and caste walls still exist in a state like this?

In Thirukural, Thiruvalluvar says, by birth, all are equal.

Records talk about saints who raised their voices against the caste system, and that was even before Thiruvalluvar.

One of the greatest Tamil poets of the 19th century and the last saint, Ramalinga Vallalar (1823-1874) writes about the need to eradicate the caste system through Suddha Sanmarga Sangam.

Through his poems, he tells people that there is no caste or religion in society.

I am talking about these people to let you know that social reform movements started in Tamil Nadu much before Periyar.

So, you can’t say it was Periyar who started the anti-caste movement; he was part of a chain that was started centuries ago by many saint-poets-reformers.

Then the Left parties joined Periyar’s movement. Working along with Periyar was Singaravelar who founded the first trade union in India.

In fact, even before Periyar there was Ayodhya Dasa Panditar who was described as south India’s first anti-caste crusader.

Yes, that is the question. Why is it that Tamil Nadu still has untouchability walls?

As a person who has been working in this field for the last more than 20 years, I can say that the social reforms that had started several years ago, have had an impact on Tamil society.

But the problem was, somewhere along the way, it stopped having an impact.

When did that happen?

After Periyar, the reforms almost stopped. Are the governments not responsible for this?

Of course, they are responsible. The governments that came after Periyar were led by people who were followers of Periyar, whether it was the AIADMK or the DMK.

The Left parties have always been weak players in Tamil Nadu, so they were not able to create much impact.

Then the question is, why did the reforms stop after Periyar?

Actually, the focus of Periyar’s movement was brahmins versus non-brahmins. That was because during that period, it was the need of the hour.

The time was when brahmins dominated totally in the fields of education, politics and employment, marginalising the rest of the society.

And the most important part was, 80% of cultivable wet land was in their hands.

In fact, because of their dominance in education, employment and land ownership, they dominated in politics too.

So, Periyar understood that what the society urgently needed was an anti-brahmin movement. The movement that started in the 1940s continued till mid-1960s.

In those days, he was the only leader who used to get invited by all the communities and would attend every single conference.

In those conferences, he used to also ask them why they indulged in atrocities against the Dalits.

What I want to say is, Periyar worked against oppressing the Dalits also though the movement was mainly anti-brahmin.

Do you think the leaders who came after Periyar did not work like him?

The difference was, Periyar was not part of ‘voting politics’ or ‘election politics’; he was the leader of a social movement.

But the parties that came after Dravida Kazhakam were political parties and they needed votes to come to power.

So, working against those who indulge in anti-Dalit activities came down.

In fact, the largest chunk of voting population today belongs to the backward communities. So, you will hold these political parties responsible for what is happening against Dalits in Tamil Nadu villages?

Yes. Yes. I will not say they did not do anything.

Both the AIADMK and the DMK have taken measures to give education, houses, scholarship, etc. to Dalits. But what they have done is not enough.

With votes in mind, the political parties never told the backward class that the untouchability they practice was wrong.

The reason why caste discrimination still exists in Tamil Nadu villages is because of the compromises of this sort adopted by various governments.

Political parties also like this segregation as it is easier for them to get votes.

I agree, the situation in Tamil Nadu is better than the northern states.

How do you compare the situation in neighbouring Kerala with Tamil Nadu?

Like Tamil Nadu had Periyar, Kerala had social reformers like Narayana Guru and Ayyankali who worked against the caste system.

The difference in Kerala is that whether it was the Congress or the Left, they were all followers of Narayana Guru and Ayyankali.

The result: Both the governments saw to it that the social reforms propagated by these two reformers were implemented in Kerala.

Do you feel the major difference was the land reforms in Kerala because of which the land owners had to part with their land, and the landless labourers also became owners of land?

That’s a very major difference and an important point to note.

Unlike in Kerala, land reforms did not happen in Tamil Nadu.

In the beginning, all the major cultivable land was with the brahmins. But today, most of the of wet land is in the hands of the backward class.

After the Dravidian movement in the 1960s, political power shifted from the brahmins to the non-brahmins. So, today they have both land and political power.

If you look at Kerala, because of the land reforms, they have had Dalit ministers in major departments for a very long time. This has not happened in Tamil Nadu. Which is more important for the Dalits to be on par with the other communities — owning land or getting educated?

Owing land is very, very, important in Indian society because domination in Indian villages is by land owners.

If you look at all the villages in Tamil Nadu where caste discrimination is at its worst, you will see that Dalits have no land ownership.

This is not the situation in the cities but in villages, the landless people are discriminated against.

More than education, when ownership of land shifts, discrimination will stop.

Unless land is distributed to landless Dalits, untouchability and discrimination will not stop.

We have been fighting for this for the last two decades.

Is it not shameful that even after 75 years of Independence, you have an organisation called the Untouchability Eradication Front?

Can you believe if I were to say there are thousands of ‘untouchability walls’ in Tamil Nadu? We have already demolished 27 such walls.

Do you know why people build untouchability walls?

The main reason is, ‘they’ do not want to see Dalits especially in the morning!

Next, according to Manuvadis, Dalits are uncultured and hence should not enter where ‘they’ live.

You mean the wall they have created in their minds manifest as real walls?

There is also a recent reason for these untouchability walls.

There is a huge difference between the value of a piece of land on either side of such walls.

I will give you an example. Our office is next to the Periyar bus stand in the heart of Madurai city.

On the left side of the bus stand is a Dalit colony. On the right side is the non-Dalit area.

Can you believe, the value of the land on the right side of the bus stand is 30 times higher than the left side?

So, what will the real estate owner do? He will build an untouchability wall so that he can protect the value of the land on the right side.

When you question the real estate builders, they say, you cannot call it untouchability wall, it is a safety wall as it’s built all around the property!

When do you think people will stop building such untouchability walls?

You asked me about the wall that is created in the minds of people.

So my answer is, we will have a society without untouchability walls only when people demolish the walls built in their minds!