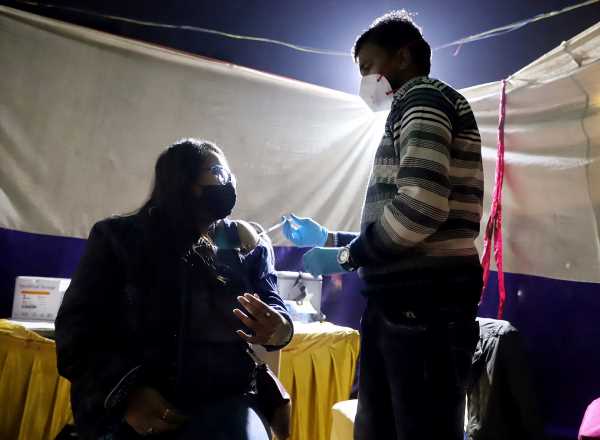 India will see a surge in Omicron-driven Covid cases and a high positivity rate but the infection will hopefully be mild in most people as is being seen in South Africa, says Dr Angelique Coetzee who first identified the variant.

The chairperson of the South African Medical Association also said existing vaccines will definitely control the contagion but those unvaccinated are at 100 per cent ‘risk’.

“Existing vaccines will greatly help reduce the spread of the Omicron variant,” Coetzee told PTI in a phone interview from Pretoria.

In the case of a vaccinated person or one who has had a history of being infected by COVID-19, it will spread to fewer people, she said, adding that unvaccinated people will potentially spread the virus 100 per cent.

“Existing vaccines would greatly help to reduce the spreading, as we know that you would spread only about 1/3 if vaccinated or had previous history of being infected by Covid, while unvaccinated people will potentially spread the virus 100 per cent,” she said.

According to the South African expert, who first brought the Omicron variant to the world’s notice, the Covid pandemic is yet to be over and will become endemic in the days to come.

She disagreed with the opinion of some experts that Covid is heading towards an end with the advent of Omicron, which as of now is comparatively a weaker variant of the coronavirus.

“I do not think so. I believe it will be difficult (for the ongoing COVID-19 pandemic to end soon). I presume it will become endemic,” she predicted.

“India will see a surge in Omicron-driven COVID-19 cases and simultaneously there will be a high-positivity rate. But hopefully the majority of the cases will be as mild as what we are seeing here in South Africa,” she added as India on Saturday reported 415 cases of the Omicron variant.

Of these, 115 have recovered or migrated, according to the Union Health Ministry data.

In Coetzee’s view, any virus which grows out of control will potentially be a threat to humans.

Discussing the character of the Omicron strain of Covid that is spreading fast across the world and has dampened year-end festivities in many parts of the country, Coetzee said it attacks ‘warm bodies’ and is also infecting children.

“… for now Omicron is not threatening but it is fast spreading with a high infectivity rate, but less severe cases in hospitals. The virus’ sole purpose is to infect a warm body and to survive. And yes, children are also being infected by it, but they are recovering in an average of five-six days,” she said.

Can the Omicron variant again mutate and change its character?

“Yes, it might mutate in the future to be more deadly, or it might not,” she said.

The 61-year-old medical practitioner also held that human behaviour such as wearing masks as well as following safety protocols for COVID-19 will play a huge role in controlling the transmission of Omicron.

“You cannot rely on vaccines alone. Human behaviour unfortunately also plays a huge role and one also needs to be responsible and take ownership of what you do,” she stated.

“Vaccines, boosters, masks, good ventilation, stay away from crowds and common sense. Also know the symptoms and when to test, when to see a doctor and get treatment,” the renowned South African doctor said.

In India, Maharashtra has recorded the highest number of 108 Omicron cases, followed by Delhi with 79, Gujarat 43, Telangana 38, Kerala 37, Tamil Nadu 34 and Karnataka 31.

Christmas and New Year to restrict the spread of the virus.

The health ministry has advised states and union territories to be vigilant and monitor case positivity, doubling rate and cluster of new cases, and consider imposing curbs and restrictions at the local level on Christmas and in the days heading to the New Year.

According to South Africa’s National Institute for Communicable Diseases (NICD), 74 per cent of all the virus genomes it had sequenced in November had been of the Omicron variant. The first instance was found in a sample taken on November 8 in Gauteng.

Data indicated that between November 14 and December 4, hospitalisation across South Africa was comparatively lower than the period when the country was facing the peak linked to the Delta variant in July. ICU occupancy in South Africa has been only 6.3 per cent during this fortnight.