Dominique Lapierre, the French author with a passion for India and whose novels sold tens of millions of copies, has died, his wife announced on Sunday. 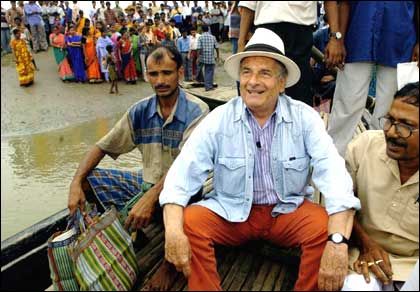 “At 91, he died of old age,” Dominique Conchon-Lapierre told the French newspaper Var-Matin.

She added that she is “at peace and serene since Dominique is no longer suffering”.

His 1985 work City of Joy, based on the hardships of a rickshaw-puller in Kolkata, turned out to be a massive success. It was also adapted for a movie in 1992 which starred Patrick Swayze and was directed by Roland Joffe.

Born on July 30, 1931, in Chatelaillon, Lapierre worked in collaboration with American writer Larry Collins, and the duo became such bestsellers that they sold about 50 million copies of the six books they wrote.

Their most popular work was Is Paris Burning? that was published in 1965 and traced the events leading up to 1944 when Nazi Germany seized control of Paris. It was eventually adapted for the big screen by Francis Ford Coppola and Gore Vidal.