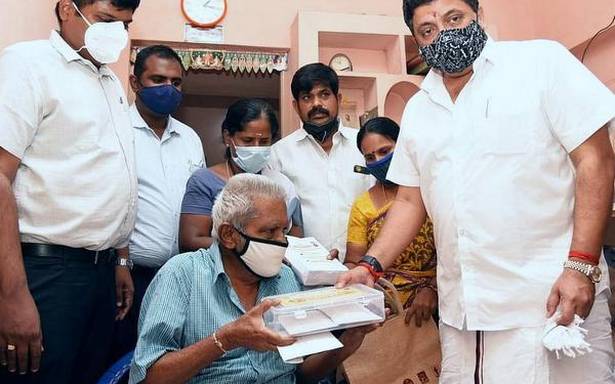 Ministers distribute medical kits to a few people at their homes

After being launched across rural areas in the district last month, the Makkalai Thedi Maruthuvam scheme, which aims to provide door-to-door medical assistance to those above 45 and others with infirmities, was inaugurated in the Corporation limits on Wednesday.

Minister for Commercial Taxes and Registration P. Moorthy launched the scheme in Ward 25 of the Corporation and Finance Minister P.T.R. Palanivel Thiagarajan initiated it in Ward 82 by distributing medical kits to a few people at their homes.

Mr. Palanivel Thiagarajan, after flagging off the vehicle that would serve the scheme, said that portion of the medical assistance that was usually provided at PHCs was now made available at people’s doorstep.

“In this pandemic time, such an initiative will help people from queuing up at hospitals. To follow up with the medication, people can always reach out to the PHCs once in a month or so.”

The scheme is being carried out with the support of healthcare workers, nurses, women health volunteers and physiotherapists.