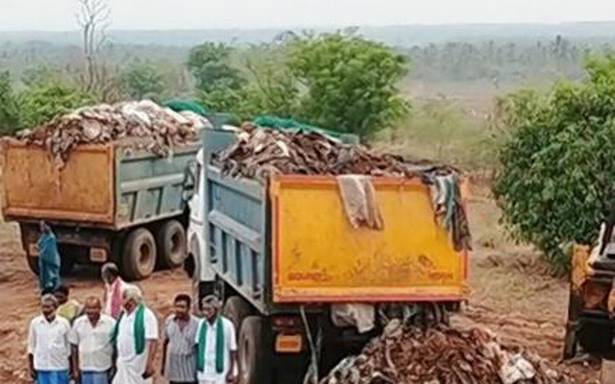 Farmers and residents of Semanampathy near Anamalai, on the Tamil Nadu-Kerala border, foiled the attempt by a group of men to dump three truckloads of garbage, allegedly from Kerala, late on Wednesday.

Police attached to the Anamalai station said people who noticed the movement of trucks laden with garbage in the locality found that they were heading to a private tract of land.

They went to the place and found that deep pits had been dug using an excavator to dump the garbage.

Around 20 men who were working there fled after people raised objections and sought the intervention of the Revenue Department and the police.

People who raised objections told the police and revenue officials that garbage was dumped frequently on the private land. They alleged that the owner of the land was earning money by allowing contractors to dump garbage there. The unscientific dumping of garbage would lead to the spread of diseases, pollution of the water table and air in the locality, they told officials.

According to the police, the Revenue Department seized three trucks and an excavator in connection with the incident.