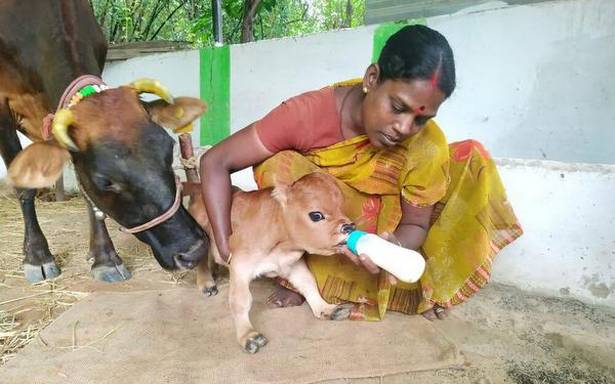 A dwarf calf in Nallamputhur, a nondescript village near Kattumannarkovil in Cuddalore district, Tamil Nadu has been attracting people from various places. Many of them are taking selfies with the tiny bovine.

The newborn calf is 32 cms tall (12.5 inches) and pictures of the calf on social media platforms have set off a frenzy among the locals.

The calf is owned by Vijayan, a dairy farmer of Nallamputhur. The family has been unable to come to terms with the calve’s abnormal body structure.

“The bovine had already delivered two healthy calves. We were shocked on seeing her size and called up the Department of Animal Husbandry for help. The calve’s abnormal size has also been hampering its movement and it has to be lifted to help it reach the udders to get lactated. We have now been bottle feeding her,” Arivu Sudar says.

According to a veterinarian, “It is a case of genetic mutation and could be a problem of either the bull or the bovine.”

In most such situations, the calf dies in a couple of days if it has other deformities. The calf has stunted growth and was unlikely to become any bigger, he said.