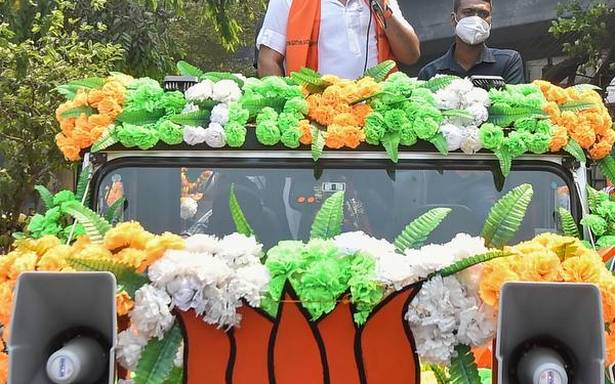 Union Minister Babul Supriyo, who is trying his luck from the Tollygunge Assembly seat, feels Chief Minister Mamata Banerjee should be barred from campaigning for making "vitriolic and communal" speeches and taking Bengal’s political discourse to an "all-time low".

Mr. Supriyo, one of most suave faces of the BJP in Bengal and the Lok Sabha MP from Asansol, rejected opposition claim of having been "demoted" after being fielded for the assembly election, and said he himself wanted to contest the poll against a "formidable opposition and not a weak one".

"Despite being a chief minister, the kind of comments that Mamata Banerjee is making is shameful. Through her vitriolic speeches and the communal campaign, she has taken the political discourse to an all-time low. The EC should ban her from campaigning for the entire election," Mr. Supriyo told PTI in an interview.

Criticising Ms. Banerjee and the ruling TMC dispensation for changing the grammar of political opponents to enemies, Mr. Supriyo, a noted singer, appealed to everyone to refrain from making personal attacks.

He said, in politics, people should fight over ideology and policies.

"But this change from opponents to being treated as enemies is a gift of Mamata Banerjee to Bengal politics. This trend has to change, and BJP will change it," he said.

Responding to claims that several party MPs and senior leaders have been "forced" to contest the assembly polls as the BJP did not have enough good candidates, the Minister of State or Environment replied in the negative.

"BJP is fighting for Bengal’s honour, pride and soul, and we all want to play our part in it," he asserted.

The BJP has fielded five MPS, including Rajya Sabha MP Swapan Dasgupta and party vice-president Mukul Roy. Mr. Dasgupta had to even resign from the Rajya Sabha due to constitutional reasons.

When asked why he was contesting from a seat far away and more challenging than his home constituency Asansol, Mr. Supriyo said he wanted to fight from a tough seat. He is a two-term MP from Asansol.

"I am happy to play my part in this fight to free Bengal from misrule, and when my name first came up, I requested the leadership to pit me from a tough seat. Fighting from Asansol would be a cakewalk for me.

"I wanted to fight from a tough seat against a formidable opposition, and that’s why I am here to defeat Mamata Banerjee’s trusted lieutenant," he asserted.

Exuding confidence about the BJP coming to power bagging more than 200 seats, Supriyo, however, evaded a question on whether he will be in the race for the chief minister’s chair.

"I am a person who believes in doing a job at hand. Right now, I am focusing on winning the seat. Regarding your question, it is for the party to decide. I have nothing to say about it. I will follow the instructions of the party," the fifty-year-old singer-politician said.

He replied in the negative when asked whether not declaring a chief ministerial candidate against Mamata Banerjee will prove disadvantageous for the BJP.

"It is a decision of the party. We are a democratic party. We are fighting as a team. Now the main goal is to defeat the TMC," Mr. Supriyo said.

Accusing the TMC of fuelling identity and appeasement politics, Mr. Supriyo slammed the ruling party for trying to divide people with the "insider-outsider" debate.

"First, you bring in appeasement politics and fuel communal politics. Then you bring in this insider-outsider (debate). How can an Indian be an outsider in any part of the country? It is not only distasteful but also against the principles of the Constitution," he said.

Polling for Tollygunge will be held on April 10.