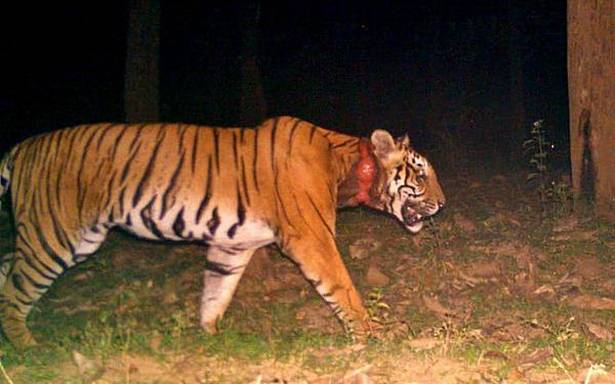 Forest officials have intensified combing operations to capture a straying tiger that has triggered panic among the people in four divisions of Mananthavady municipality for the past many days.

The carnivore is believed to be have killed 13 domestic animals in the region in 16 days.

“Though a team of forest officials comprising nearly 80 staff, with the support of the police, started the combing operations on Tuesday morning using every possible method to track and capture the tiger, it was in vain after the animal hid in a coffee plantation at Kurukkanmoola,” North Wayanad forest divisional officer Ramesh Bishnoi, who led the team, told The Hindu.

“We used the service of two kumki elephants (trained elephants) and used three drones for the search, but we could not track it owing to the canopy density of coffee plants and other trees in the plantation”, he said.

“We have got two images of the tiger and it seems the animal has sustained injuries on its neck,” Mr. Bishnoi said. The image has been sent to the Parambikkulam tiger reserve for identifying the image with the database of tigers, Mr. Bishnoi said.

As many as five cages have been set up in the area to capture the tiger and 35 surveillance cameras were also installed to monitor its movement, he said.

Meanwhile, Wayanad District Collector A. Geetha visited the area to assess the situation on Tuesday. She said all possible steps had been adopted to capture the big cat.

However, it was difficult to locate it now as the pattern of its movement was unpredictable. Orders were issued to capture the animal by firing tranquilizer shots also but, the officials were yet to sight the animal for the purpose, Ms. Geetha said.

“We recommended the government to provide appropriate compensation to the farmers for the loss of their domestic animals”, she said.

The three-day prohibitory orders issued by the Wayanad Sub Collector in four divisions of the municipality were extended to Wednesday. Special protection would be given to the public, especially students and dairy farmers in the morning hours, with the support of police and forest officials, Ms. Geetha said.