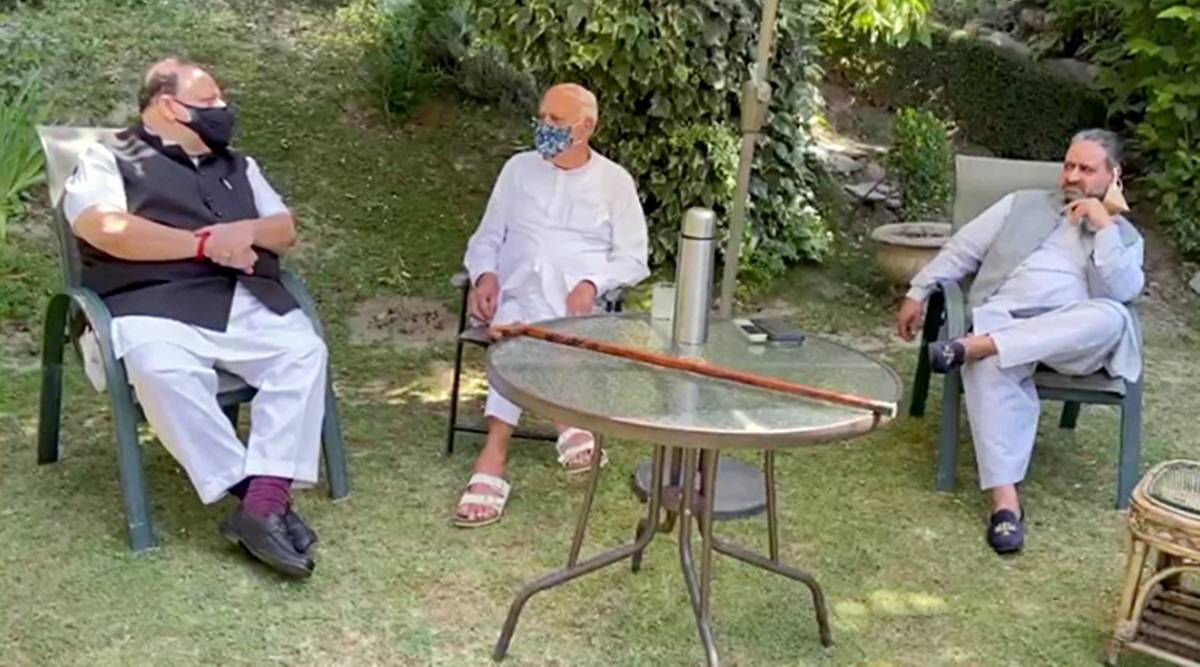 The meeting comes ahead of the discussions scheduled in New Delhi on Thursday between Prime Minister Narendra Modi and leaders of the People’s Alliance for Gupkar Declaration. On the eve of the Prime Minister’s meeting with leaders of mainstream parties in Jammu & Kashmir, the Election Commission held a virtual-mode meeting Wednesday with Deputy Commissioners of all J&K districts to discuss details of existing electoral constituencies.

Sources in the J&K administration said Deputy Election Commissioner Chandra Bhushan Kumar’s meeting with the DCs was called to discuss “boundaries of the existing electoral constituencies, intersections of constituencies with other districts and tehsils”.

The meeting comes ahead of the discussions scheduled in New Delhi Thursday between Prime Minister Narendra Modi and leaders of the People’s Alliance for Gupkar Declaration (PAGD), a coalition of mainstream parties in J&K.

The Centre sees the Delhi talks, the first since the stripping of the special status of J&K and its bifurcation into two Union Territories in 2019, as a crucial step towards the return of elected representatives and the holding of Assembly elections subsequently in the two UTs to end Central rule imposed in June 2018.

The government, official sources have indicated, is ready to discuss all issues that the J&K parties will bring to the table, but for now it is focused on getting the delimitation exercise completed and hold elections in J&K as soon as possible.

At the meeting Wednesday, the DCs were asked about problems faced by voters of an area of an assembly constituency which does not have any geographical contiguity, whether voters have to travel long distances in such constituencies, or places which fall in one district but are included in a constituency falling in some other district.

The meeting was held in two sessions — from 11 am to 12.30 pm and 1.30 pm to 3 pm. The first session was with the DCs of Jammu, Samba, Rajouri, Poonch, Kupwara, Bandipora, Baramulla, Srinagar, Ganderbal and Budgam. The DCs of Kishtwar, Doda, Ramban, Udhampur, Reasi, Kathua, Pulwama, Shopian, Kulgam and Anantnag joined the second session.

The meeting was held three weeks after details were sought from the districts.

On June 3, the office of the Joint Chief Electoral Officer of the UT of J&K, wrote to the DCs of all 20 districts, seeking details on intra-district demographic distribution, distribution of administrative units, pockets of high and low density population, and migratory population.

The letter also asked the DCs to send information on “any known political aspirations of people in the district vis-a-vis constituencies”, “representations received for creation or change of constituency from a specific group of people or a specific community”.

These details, sources said, were sent to the office on June 5.

In Srinagar, NC president and PAGD chairman Farooq Abdullah, who will also attend the talks Thursday, continued to consult members of his party.

NC provincial president (Jammu) Devender Singh Rana, who met Abdullah, said the party is ready for “any dialogue that can take us out of this morass and any dialogue which will lead to the welfare of the state of J&K and its people”.

He said the NC leadership in Jammu has reposed faith in Farooq Abdullah. “He’s not just the president of NC, he’s the tallest leader of J&K and he has assured us that he will represent the people from all regions — Jammu, Kashmir and Ladakh.”

Rana said pluralistic Jammu has its own aspirations and desires. “We are for a singular J&K, and have always stood for equitable justice for all regions and sub-regions of the UT,” he said.

Describing the scheduled meeting with the PM as an “inclusive dialogue”, the NC leader said, “Everything is not about elections. We are at a crossroads in J&K’s history and dialogue is the only way forward. There is no reason to sabotage dialogue.”