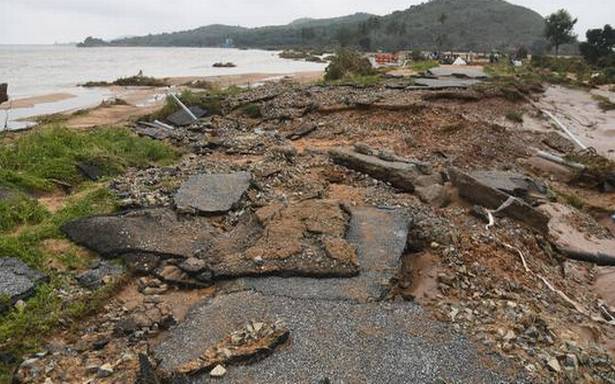 Nearly one lakh people have been affected by the floods in the Rayalaseema region, Chief Minister Y.S. Jagan Mohan Reddy said, while directing the administration to ensure that every family is provided basic ration.

During a video conference with Collectors and officials of the flood-battered districts on Wednesday, Mr. Jagan said the loss of property should be enumerated quickly and electricity and water supply should be restored immediately. He asked the administration to ensure wide publicity to ‘104’ helpline as a one-stop facility to all those in distress.

Mr. Jagan said ₹95,000 should be paid as compensation for those who lost their kin, and directed the officials to sanction ₹1.80 lakh for constructing new house. He directed the officials to complete crop enumeration on a war-footing. He said District Collectors should submit reports on road restoration. He said temporary work should be undertaken immediately to avoid any disruption to transport.

Mr. Jagan said Annamayya project should be designed to hold 2.85 lakh cusecs of water, instead of 2.17 lakh cusecs. He said the project received an inflow of 3.25 lakh cusecs of floodwater resulting in a breach.

He said a report was submitted in 2017 regarding Annamayya Project to improve the quality of the dam and it was neglected by the previous government. He said the capacity of Pincha project was 58,000 cusecs while project received an inflow of 1.38 lakh cusecs of floodwater.

The Chief Minister directed the officials to focus on the safety of irrigation projects in 13 districts. He said the incidents like Annamayya project breach should not happen in future. He instructed the officials to be vigilant in the wake of heavy rain forecast in Nellore and Prakasam districts from November 26 for four days and make necessary preparations.