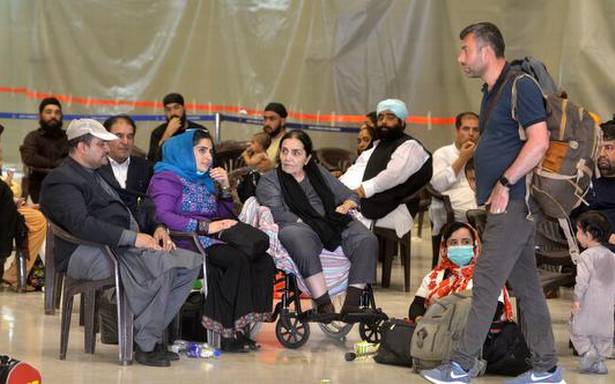 A sense of relief and gratitude was palpable among the evacuees from Afghanistan as they landed at Ghaziabad’s Hindon airbase on Sunday morning, after days of uncertainty following Kabul’s fall to the Taliban.

A total of 168 people, including 107 Indians and 23 Afghan Sikhs and Hindus, were flown from Kabul to the Hindon airbase in a C-17 heavy-lift military transport aircraft of the Indian Air Force (IAF).

Terming India his “second home”, Mr. Khalsa narrated his horror story which unfolded as their vehicle was separated from a convoy of those being taken to the Kabul airport for rescue.

The flight carrying 168 people include 107 Indian nationals and 61 others and landed at Hindon Air force base near New Delhi. | Photo Credit: AP

“They [Taliban] separated us from others while going to Kabul airport yesterday [Saturday] as we are Afghan nationals. We fled from there because small children were with us,” he told reporters at Hindon.

The lawmaker, a resident of Kabul, expressed hopes that he will manage to go back to his country after it rebuilds itself.

“India is our second home. We have been living there since generations. We pray to God that Afghanistan is rebuilt, and we can go back there to tend to our gurdwaras and temples and serve the people,” Mr. Khalsa added.

Explaining the ground situation in Afghanistan and its new rulers, Mr. Khalsa said, “The Taliban is not one group. There are 10-12 sections. It is hard to find who is a talib and who is not.” Honaryar, a member of the Upper House of Afghan Parliament, in a video message, said “I thank the government of India, Prime Minister Narendra Modi, the Ministry of External Affairs and the Indian Air Force for lifting us from Kabul and saving my life.” All the evacuees arriving at Hindon and the IGI airport in the national capital underwent RT-PCR tests, officials said.

Alladad Qureshi, an Afghan national whose wife hails from Kashmir, expressed a sense of relief as he interacted with media persons at Hindon.

“I have two daughters. We thank the government of India, Modiji, MEA and air force for saving us,” he said.

Manik Mandal, a young jeweller who had gone to Afghanistan six months ago in search of livelihood, smiled as he said, “We faced a lot of problems in Kabul, but our government saved us.” India on Sunday brought back nearly 400 people, including 329 of its nationals, in three different flights as part of its efforts to evacuate its citizens from Kabul against the backdrop of a deteriorating situation in the city after its takeover by the Taliban.

Another group of 87 Indians and two Nepalese nationals were brought back in a special Air India flight from Dushanbe, a day after they were evacuated to the Tajikistan capital in an IAF aircraft, the officials said.

Separately, 135 Indians evacuated from Kabul to Doha in the last few days by U.S. and NATO aircraft were flown back to Delhi on a special flight, they said.