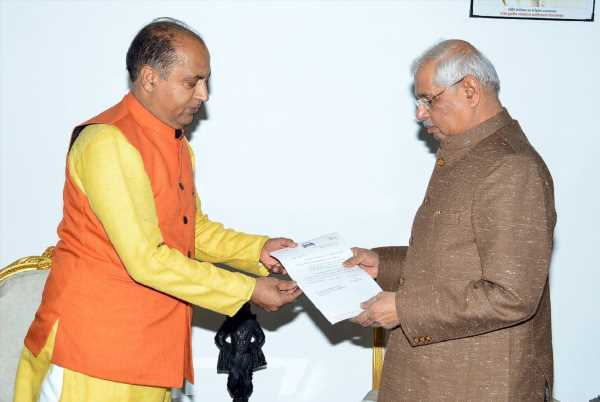 Jai Ram Thakur was an accidental chief minister. Though the Bharatiya Janata Party won the assembly election in 2017, its CM face Prem Kumar Dhumal lost his own Sujanpur seat.

The party then picked Thakur, then a five-time winner from Seraj in Mandi district.

This time he was the Bharatiya Janata Party’s deliberate choice for the top job in the state.

Well ahead of the November 12 assembly elections, the BJP projected Thakur as the next chief minister.

But as the counting of votes progressed Thursday, it became clear that the BJP won’t be able to hold on to power in the state that has alternated between the two main parties every election after 1985.

So even before the final results were out, Thakur drove to Raj Bhavan with his resignation letter. “I respect the mandate,” he told reporters before handing in his papers.

Thakur, 57, is regarded as an astute politician who prefers to keep a low profile.

During the campaign, Thakur focused on the themes of “development” and the BJP’s “double-engine” government, a reference to the advantage of having the same government in the state and at the Centre.

When opposition leaders described him as an “accidental chief minister”, Thakur’s typical reply had been, “Yes, I am and I am here to stay”.

But every time he travelled to Delhi, there were murmurs that he would be replaced by his party’s top leadership, and after the BJP’s defeat in three assembly and Mandi Lok Sabha constituencies in 2021, voices for change became shriller.

But the party stuck with him.

While he talked about a “double engine” government during his term, his opponents claimed that the state government was being run from Delhi.

His handling of the bureaucracy also attracted flak from the opposition.

His five-year term saw seven different chief secretaries, and reshuffles in the bureaucracy were routine.

Jai Ram Thakur was born on January 6, 1965 in Tindi village in Mandi’s Thunag tehsil. His father Jhethu Ram worked as a mason and Thakur studied at the village school. He graduated from Mandi’s Vallabh Government College in 1987 and did his post-graduation from Punjab University in Chandigarh.

He is married to Sadhana Thakur, a doctor, and his two daughters are also set to enter the same profession.

His political career began with a defeat in the 1993 assembly polls, but he went on to win six assembly elections in a row — three from Chachiot in 1998, 2003 and 2007, and after an Election Commission delimitation exercise, thrice from Seraj in 2012, 2017 and this time again.

Thakur joined the Rashtriya Swayamsevak Sangh-affiliated Akhil Bharatiya Vidyarthi Parishad in college and held several positions in the outfit, including its state secretary and the organisational secretary for Jammu and Kashmir.

He was also the Bharatiya Janata Yuva Morcha state president, before becoming the vice president and the president of the state BJP.

In 2009, he was inducted in the state’s BJP cabinet headed by Prem Kumar Dhumal and given the portfolio of Rural Development and Panchayati Raj.

He was the first chief minister from Mandi district. In 2017, the BJP also won nine out of 10 seats from his Mandi district. Mandi was set for a repeat performance this time as well.

In 2013, he contested the Lok Sabha bypoll in Mandi but lost to Pratibha Singh, the current state Congress president and the wife of former chief minister Virbhadra Singh.