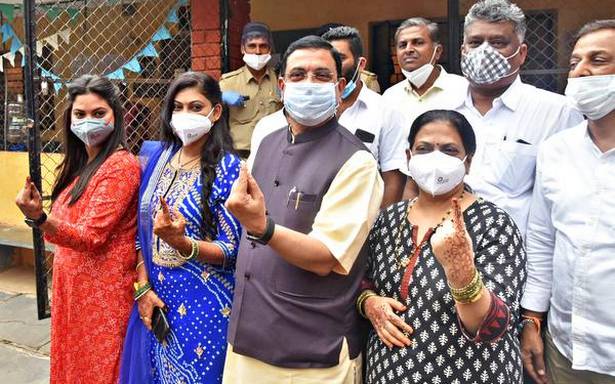 Union Minister for Parliamentary Affairs, Coal and Mines Pralhad Joshi has said that the party will effectively utilise the experience of senior leaders and former Chief Ministers B.S. Yediyurappa and Jagadish Shettar in the coming days.

Speaking to presspersons after casting his vote in the municipal council election in Hubballi on Friday, Mr. Joshi said that no senior leader in the party is being neglected. The core committee meeting has not been held due to COVID-19 and in the coming days, decisions will be taken in consultation with senior leaders.

Reacting to a statement of Union Home Minister Amit Shah about the State BJP facing the next election under the leadership of Chief Minister Basavaraj Bommai, he said that it was natural for a Chief Minister to lead the election campaign and there is nothing special in it. On Mr. Bommai’s performance in the first month, he said that he had taken several initiatives and is giving good governance. He said that the BJP will come back to power winning around 60 seats in the 82-seat municipal council in Hubballi-Dharwad. Unlike other parties, the BJP has a strong leadership and strong leadership is required for development which is very well understood by the voters of Hubballi Dharwad.

Meanwhile, speaking to presspersons after casting his vote at Vinayak Colony in Hubballi, Mr. Jagadish Shettar said that he will be abide by the party’s decision on who will lead the election campaign in the next elections.

However, replying to a query on his next step as he had declined to accept a Cabinet berth this time, Mr. Shettar said that there is still a lot of time for the next Assembly elections.

Mr. Shettar also said that the party will win over 60 seats in Hubballi-Dharwad Municipal Corporation to come back to power.