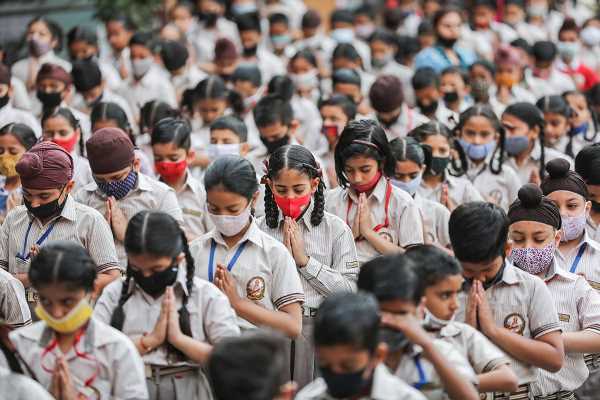 With the COVID-19 positivity rate in Delhi breaching the five per cent-mark again, doctors on Sunday said people developing coronavirus-like symptoms should get themselves tested and authorities should make the wearing of masks mandatory to help check the spread of infection.

The COVID-19 positivity rate in the national capital has jumped from 0.5 per cent to 5.33 per cent in two weeks.

While the Delhi Disaster Management Authority will take stock of the situation on April 20, the doctors said that the meeting should have been held in New Delhi in view of the recent daily spurt in cases and the major spike in the positivity rate.

On Saturday, the city logged 461 cases with a positivity rate of 5.33 per cent, while two deaths were also reported. On Friday, Delhi had recorded 366 cases.

Before this, the city had reported a positivity rate of 5.09 per cent on February 1, while on January 31, the figure was 6.2 per cent.

Doctors at leading government and private hospitals emphasised that there was a need to increase testing in the wake of the spike in cases, even as they said that”no drastic restrictions” were needed as of now.

“People who are developing symptoms are not going for COVID-19 test, largely. Now, with a surge in cases and the positivity rate beyond five per cent again, I would urge people to go for testing if they are having symptoms.

“Even those going for home isolation should go for testing,” said a senior doctor at LNJP Hospital.

Dr Ritu Saxena, who heads the emergency department at the Delhi government’s largest facility and a key COVID-19 hospital in New Delhi, said that large gatherings should now be avoided and people should wear masks and follow COVID-appropriate behaviour.

The Delhi government had on April 2 stopped the imposition of fines for not wearing masks.

As the DDMA meeting is scheduled to be held on April 20, “we can expect some sort of restrictions possibly, given the surge in cases and mounting positivity rate”, she said.

“We have 250 beds reserved for COVID-19 patients, and depending on the situation, the entire facility again can be reserved for them. Currently, five patients are in the ICU, but none are on ventilator,” she said

Dr Suranjit Chatterjee, senior consultant, internal medicine, at the Apollo hospital noted that hospitalisation is still less, but batted for ‘logical’ and ‘stringent’ measures to check the spread of the infection.

“Given the situation in Delhi, the DDMA meeting should have been held a bit earlier. Also, the mask mandate needs to be brought back,” he said.

With the climbing positivity rate, the right move would be to take “logical, stringent measures,” he added.

“We lost a COVID-19 patient lately at the hospital, but he was 79 and had co-morbidities. The good thing so far is that the number of hospitalised Covid patients is still less and severity is also less,” Chatterjee said.

The doctor said that the current situation in Delhi doesn’t warrant major curbs like shutting of markets and closing of physical offices, as the economy has suffered heavily already under the three waves of the pandemic.

But, the situation is evolving, “so we will have to also closely watch it,” Chatterjee said.

Doctors at several major government and private facilities had earlier this week cautioned that a “sense of complacency had set in among the masses” in general, especially after the mask mandate was removed recently by authorities.

The steady rise in the positivity rate has triggered concerns about a possible new wave of the coronavirus pandemic in the city.

Doctors have also said that vaccination and herd immunity has “certainly provided a level of protection too” to people.

The nationwide vaccination exercise had begun in January 2021 and currently, the exercise to deliver a precaution dose is underway.

Delhi Chief Minister Arvind Kejriwal on Tuesday said his government is keeping a close watch on the COVID-19 situation in the capital and there is no major reason to panic at present. He said also said that all necessary steps will be taken.