Farmers in Punjab and Haryana have been protesting against three ordinances promulgated by the Centre on June 5. A look at these, one by one 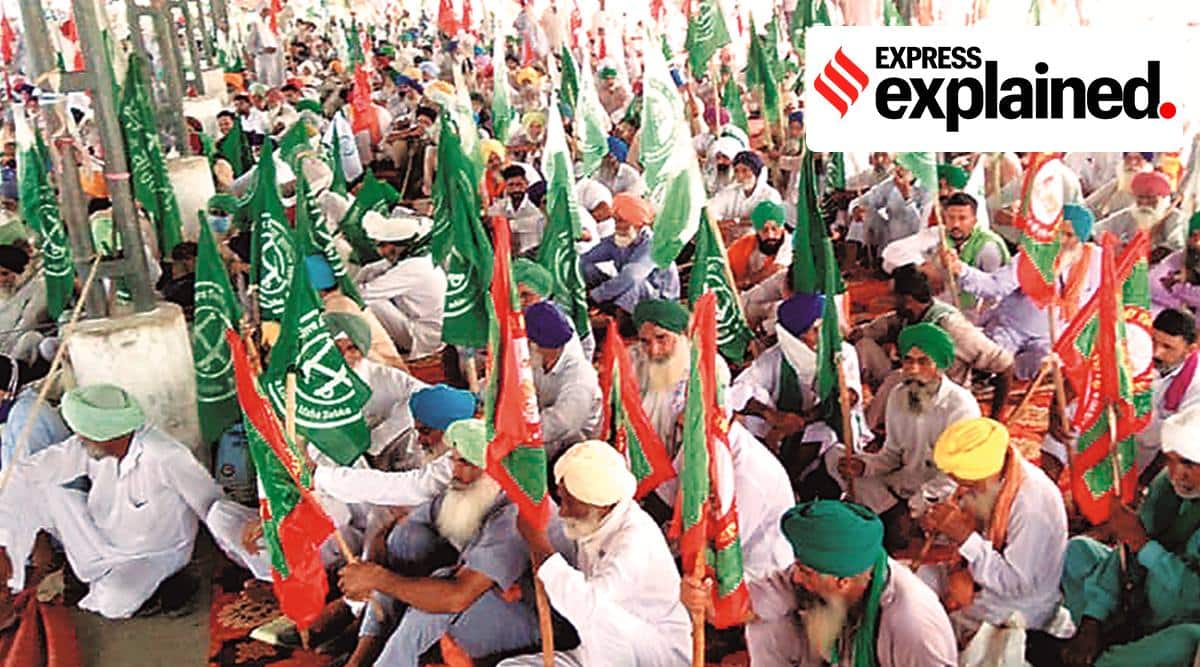 Farmers in Punjab and Haryana have been protesting against three ordinances promulgated by the Centre on June 5. After the Monsoon Session of Parliament began this week, the government has introduced three Bills to replace these ordinances. Lok Sabha passed one of these on Tuesday, and the other two are listed for consideration and passing during the current session.

What are these ordinances, and why are farmers protesting?

While farmers are protesting against all three ordinances, their objections are mostly against the provisions of the first. And while there is no uniform demand among the protesters or a unified leadership, it emerges that their concerns are mainly about sections relating to “trade area”, “trader”, “dispute resolution” and “market fee” in the first ordinance. A look at these sections, one by one:

Section 2(m) of The Farmers Produce Trade and Commerce (Promotion and Facilitation) Ordinance, 2020 defines “trade area” as any area or location, place of production, collection and aggregation including (a) farm gates; (b) factory premises; (c) warehouses; (d) silos; (e) cold storages; or (f) any other structures or places, from where trade of farmers’ produce may be undertaken in the territory of India.

The definition does not, however, include “the premises, enclosures and structures constituting (i) physical boundaries of principal market yards, sub-market yards and market sub-yards managed and run by the market committees formed under each state APMC (Agricultural Produce Market Committee) Act”. It also excludes “private market yards, private market sub-yards, direct marketing collection centres, and private farmer-consumer market yards managed by persons holding licences or any warehouses, silos, cold storages or other structures notified as markets or deemed markets under each State APMC Act in force in India”.

In effect, existing mandis established under APMC Acts have been excluded from the definition of trade area under the new legislation. The government says the creation of an additional trade area outside of mandis will provide farmers the freedom of choice to conduct trade in their produce.

The protesters say this provision will confine APMC mandis to their physical boundaries and give a free hand to big corporate buyers. “The APMC mandi system has developed very well as every mandi caters to 200-300 villages. But the new ordinance has confined the mandis to their physical boundaries,” said Balbir Singh Rajewal, president of Bhartiya Kisan Union (Rajewal), who tried to protest against the ordinances at Jantar Mantar in New Delhi but was not allowed by police. 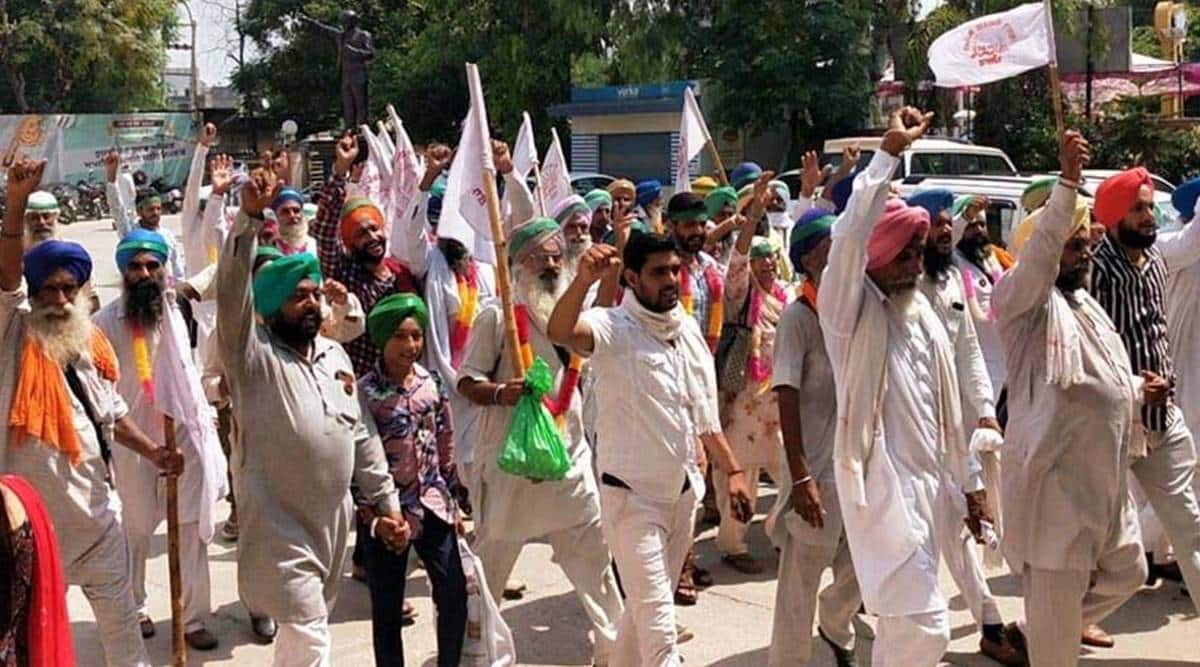 What is ‘trader’ and how is it linked to the protests?

Section 2(n) of the first ordinance defines a “trader” as “a person who buys farmers’ produce by way of inter-State trade or intra-State trade or a combination thereof, either for self or on behalf of one or more persons for the purpose of wholesale trade, retail, end-use, value addition, processing, manufacturing, export, consumption or for such other purpose”. Thus, it includes processor, exporter, wholesaler, miller, and retailer.

According to the Ministry of the Agriculture and Farmers’ Welfare, “Any trader with a PAN card can buy the farmers’ produce in the trade area.”

A trader can operate in both an APMC mandi and a trade area. However, for trading in the mandi, the trader would require a licence/registration as provided for in the State APMC Act. In the present mandi system, arhatiyas (commission agents) have to get a licence to trade in a mandi.

The protesters say arhatiyas have credibility as their financial status is verified during the licence approval process. “But how can a farmer trust a trader under the new law?” Rajewal said.

This also explains why the protests have mostly been concentrated in Punjab and Haryana. The arhatiya system is more influential in these two states than in other states, agriculture experts said.

Why does the provision on ‘market fee’ worry protesters?

Section 6 states that “no market fee or cess or levy, by whatever name called, under any State APMC Act or any other State law, shall be levied on any farmer or trader or electronic trading and transaction platform for trade and commerce in scheduled farmers’ produces in a trade area”. Government officials say this provision will reduce the cost of transaction and will benefit both the farmers and the traders.

Under the existing system, such charges in states like Punjab come to around 8.5% — a market fee of 3%, a rural development charge of 3% and the arhatiya’s commission of about 2.5%.

Rajewal said that by removing the fee on trade, the government is indirectly incentivising big corporates. They said this provision does not provide a level playing field to APMC mandis. “If you calculate the mandi transaction cost on 1 quintal wheat, at 8.5% all inclusive, it comes about Rs 164. So, on the sale of every quintal of wheat outside of the mandi, you are incentivising big corporates, who will use this difference to offer better prices to farmers in the initial days. And when the APMC mandi system collapses in due course, they will monopolise the trade,” Rajewal said.

A government official, on the other hand, questioned why the states do not make transactions in mandis cost-efficient. “When they are giving free electricity and other subsidies, why can’t they provide a free facility to farmers for selling their produce?” the official said. What is the objection as far as dispute resolution is concerned?

The protesters say that the provision on dispute resolution under Section 8 does not sufficiently safeguard farmers’ interests. It provides that in case of a dispute arising out of a transaction between the farmer and a trader, the parties may seek a mutually acceptable solution through conciliation by filing an application to the Sub-Divisional Magistrate, who shall refer such dispute to a Conciliation Board to be appointed by him for facilitating the binding settlement of the dispute.

Farmers fear the proposed system of conciliation can be misused against them. They say the ordinance does not allow farmers to approach a civil court.

What is the government’s defence?

While the Opposition has echoed farmers in alleging that the new legislation will benefit only big farmers and hoarders, the government said the provisions will be beneficial to all: farmers, consumers and traders.

“Almost all agriculture experts and economists were batting for these reforms in the agriculture sector. The Centre was also persuading states to implement the Model APMC Act, 2002-03. But the states did not fully adopt it. Therefore, the Centre had to adopt the ordinance route… It will lead to helping farmers realise a better price. This is very forward-looking legislation and it is a win-win situation for all farmers, consumers and entrepreneurs,” said Ramesh Chand, member of NITI Aayog.