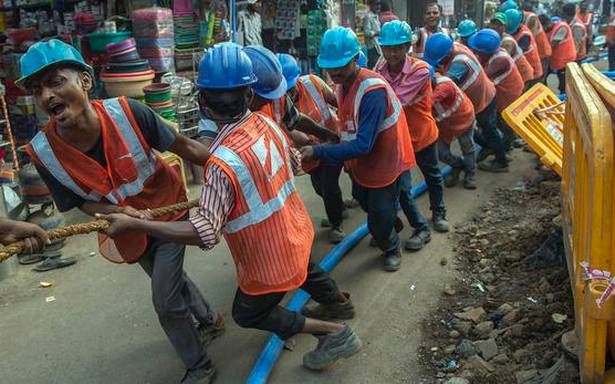 In which sectors has the recovery gained momentum? What needs to be done to sustain growth?

The story so far: For India, the year gone by has been about rebuilding from the ravages of 2020 amid the COVID-19 storm which had pushed the already slowing economy into contraction mode. To refresh the context in which 2021 dawned, the country’s Gross Domestic Product (GDP) growth had dipped to a mere 3% in the fourth quarter of 2019-2020. The pandemic-related lockdowns sent the stalling economy into free fall, causing output to shrink by 24.4% and 7.4% in the first two quarters of 2020-21, respectively. The resultant destruction meant that job and income losses coincided with the unfolding health crisis, cramping consumption and disrupting production supply chains across industries, while contact-intensive sectors like tourism, restaurants and other services haemorrhaged. It was only after the first COVID-19 wave had peaked in September 2020, that GDP growth crawled back to the surface with a meagre 0.5% rate of expansion in the third quarter. The new year, it was hoped, would help unravel the damage, aided by rapid vaccination against the novel coronavirus as well as specific policy steps to rescue and resuscitate the worst-affected sectors of the economy.

How did the Indian economy fare this year? Is it out of the woods yet?

With an eye on making up lost ground, in February, Finance Minister Nirmala Sitharaman’s Union Budget for 2021-22 bet on pushing infrastructure spending to revive the economy but refrained from providing income support for those worst affected by the pandemic. An ambitious ₹1.75 lakh crore target was set for disinvestment from public sector enterprises backed by a new policy to retain a ‘bare minimum’ presence of state-owned firms even in strategic sectors. The government explained that higher capital spending would trigger multiplier effects by nudging up demand in several sectors and spur job creation and consumption. Economists were concerned about the implementation risks of this approach, including the time public investment projects may take to fructify before the multiplier effects trickle down. While the government talked up prospects of a sharp V-shaped recovery, experts fretted about a K-shaped recovery unfolding thanks to a divergence between those who needed to protect their lives and livelihoods, and those who were able to sustain themselves like corporates and those in white-collared jobs who had not been too badly affected by the pandemic. The COVID-19 virus, however, was immune to such nuanced debates and decided to play spoiler even before the Budget fine print had sunk in. By the end of March, India was firmly in the grip of a much deadlier second wave, prompting the Centre to unveil fresh relief measures for industry as well as the vulnerable sections such as providing free foodgrains (which has now been extended till March 2022). If the virus had weighed heavily on livelihoods in 2020, this year, it claimed a far greater human cost with high fatalities. In contrast, the economic suffering from the second wave was less pronounced and supply chains were less stressed, with restrictions on mobility and business activities being localised across States, unlike the hard nationwide lockdown of 2020. Of course, this is not to say the second wave didn’t hurt growth. After a sedate 1.6% uptick in GDP between January and March, the economy expanded by an underwhelming 20.1% in the April to June quarter when it was hoped that the base effect of the sharp 24.4% slide in the previous year would push the number higher. With households being impacted more severely, consumption’s share in GDP fell during this quarter. While manufacturing and construction recovered, the economy’s overall output remained far below even the low pre-pandemic levels. Gross value added (GVA) was still 7.8% shy of the level seen in the first quarter of 2019-20, while GDP remained 9.2% lower. Things have improved, as per the latest national accounts data, but only just — as the July to September quarter registered 8.4% GDP growth pulling the economy 0.3% above the same quarter in 2019. The first half of financial year 2021-22 has now recorded 13.5% GDP growth and the Finance Ministry expects a double-digit expansion for the full year ending in March 2022. But one cannot say the economy has truly come out of the woods yet. Real GVA for the first half of this fiscal year remains 3.7% below the first half of 2019-20 and this difference is even larger for real GDP at 4.4%, EY India chief policy adviser D.K. Srivastava pointed out. “2021-22 has been spent mostly in making up for the contraction in 2020-21. Even if a real GDP growth of 9.5% is achieved this fiscal, India would land only marginally on the positive side as compared to 2019-20,” he said.

Which sectors are back to pre-pandemic levels now and where does the pain persist?

While the recovery has gained momentum despite the second wave, it still remains uneven and fragmented with economists also unconvinced about its sustainability. CARE Ratings’ economists Madan Sabnavis and Kavita Chacko noted that demand and investments were yet to see a meaningful and durable pick-up and any improvements were expected to be limited and gradual as the domestic economy had been grappling with low demand and a subdued investment climate even before the COVID-19 shock. While agriculture, the only sector to record positive growth throughout the pandemic, has held firm, sectors like manufacturing, mining, electricity, recovered above pre-COVID levels by September. But employment-intensive sectors like construction, the contact-intensive trade and hotels industry, as well as financial services and real estate, continue to languish below their pre-pandemic levels.

There are some other interesting aspects of this year’s economic trajectory. Exports have done well, hitting record numbers so far, but imports have been surging as well widening India’s merchandise trade deficit to an all-time high of $22.9 billion in November. The rupee, which had recovered after falling below 76 to a dollar in March 2020, weakened past that mark again recently. Tax collections, both direct and indirect, have fared surprisingly well. Goods and Services Tax revenues stayed above ₹1 lakh crore a month for most of the year. While retail inflation moderated in the initial period of this year after staying beyond the central bank’s 6% tolerance threshold through large parts of 2020, it has been inching back up in recent months, hitting a three-month high of 4.9% in November. Wholesale price inflation has also hit an all-time high in the current series of the index, making input costs the number one worry for businesses.

Pradeep Multani, PHDCCI president, said supply side issues such as high commodity prices and raw material shortages were denting industry margins, especially for small and medium enterprises that generate high employment. He opines that the government needs to handhold the economy in view of the risks this poses to consumption and private investments even as the new virus variant Omicron is a fresh dark cloud on the horizon.

What tidings may 2022 hold and what are the biggest risks to growth?

The uncertain effects of Omicron and other virus mutations aside, the OECD has projected global growth to slow to 4.5% in 2022, from 5.6% this year, with India’s growth pegged at 8.1% for 2022-23. On the bright side, ICRA chief economist Aditi Nayar is hopeful of consumption returning to normalcy that could ramp up industry’s capacity utilisation rate and set the stage for a broad-based investment revival by the end of 2022. Economists believe higher inflation is the biggest risk for the coming year as supply chain problems in key components, volatile commodity and oil prices as well as shipping disruptions are likely to deepen at least in the first half of the year. With retail inﬂation at a 40-year high in the U.S., interest rate hikes there could warrant a shift in the central bank’s current monetary policy stance prioritising growth over inﬂation.

India’s policy makers, be it North Block mandarins formulating the Budget or Mint Street bosses in Mumbai, have their task cut out for a smooth landing in 2022.