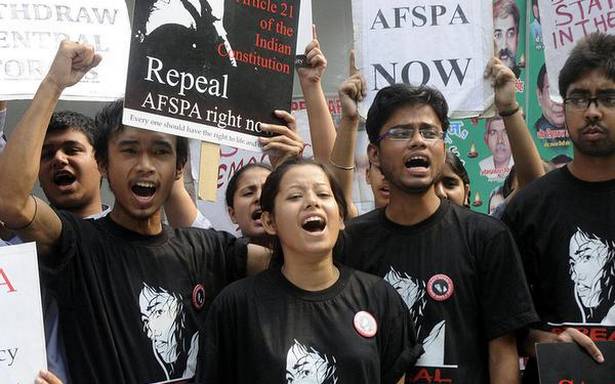 Why is the demand for repealing the law getting more vocal? What powers does it confer on the armed forces?

The story so far: The killing of 14 civilians in a botched military operation in Nagaland has led to fresh calls for repealing The Armed Forces (Special Powers) Act (AFSPA), a stringent law that allows the armed forces to use maximum force in an area declared as ‘disturbed’. Following the incident on December 4, the demand for repealing the law has become quite vociferous. Among those calling for its withdrawal are the Chief Ministers of Nagaland and Meghalaya.

What is the origin of AFSPA?

In the wake of the partition riots, four ordinances were promulgated in 1947. The first was the Bengal Disturbed Areas (Special Powers of Armed Forces) Ordinance; this was followed by ordinances for Assam, East Punjab and Delhi , and the United Provinces. These were replaced by a common legislation, the Armed Forces (Special Powers) Act, 1948. This was meant to be in force for one year, but was repealed only in 1957.

Which parts of the country come under AFSPA?

The AFSPA has been in force for decades in most parts of the Northeast States. Under this law, an area can be declared a ‘disturbed area’, bringing into play the protection it offers to the armed forces for use of force in the notified area. The notification is extended periodically, mostly for six months at a time.

As of today, the whole of Assam and Nagaland are ‘disturbed areas’. The last six-month extension was made on August 28 and June 30 respectively. The whole of Manipur, with the exception of the Imphal municipal area, has been notified by the State government for one year from December 2020.

In Arunachal Pradesh, the ‘disturbed area’ notification is confined to the districts of Tirap, Changlang and Longding, and the areas falling under Namsai and Mahadevpur police stations, bordering Assam.

The AFSPA was revoked in Tripura in May 2015, after being in force since February 1997. It was revoked by a decision of the State Cabinet following substantial improvement in the ground situation. Meghalaya was under AFSPA for 27 years, until it was revoked from April 1, 2018. The Act was implemented in a 20-km area along the border with Assam.

What does the Act say?

The Act empowers the Governor of any State, or the Administrator of a Union Territory, or the Central Government to notify parts of or the whole of a State or a Union Territory as a ‘disturbed area’, if they consider that the condition in such areas is so dangerous or disturbed that the use of the armed forces is necessary in aid of civil power.

In such a notified area, any officer of the armed forces may fire upon or use force, even to the point of causing death, against any person for the maintenance of public order. This must be done after giving due warning as considered necessary, and the target must be a person who is contravening any law, or order prohibiting the assembly of five or more persons, and carrying weapons, firearms or ammunition.

The Act allows arrest and search of any premises without a warrant in a notified area, and the recovery of any confined person, or any arms and ammunition stored unlawfully. The armed forces may also destroy any hideout, or arms dump or fortified area or shelter from which armed attacks are being launched, or any arms training is being carried out.

No person can be prosecuted or subjected to any legal proceedings for action taken under the Act, without the Central Government’s previous sanction.

Why do many demand its repeal?

Detractors and human rights organisations, as well as many sections of civil society, argue that the Act encourages impunity and is the cause of many instances of excesses and atrocities committed by the armed forces under its protective cover.

Irom Chanu Sharmila, an activist from Manipur, became an iconic figure symbolising the struggle against AFSPA after she sat on an indefinite fast in 2000, demanding its repeal. She ended it only in August 2016.

In 2005, a Government-appointed five-member committee headed by retired Supreme Court judge, B. P. Jeevan Reddy, recommended that AFSPA be repealed. It suggested that the Unlawful Activities (Prevention) Act could be suitably amended to deal with terrorism. It made this recommendation as it felt that the AFSPA created an impression that the people of the Northeast States were being targeted for hostile treatment.

However, the Army has been resolutely opposed to the repeal of AFSPA.