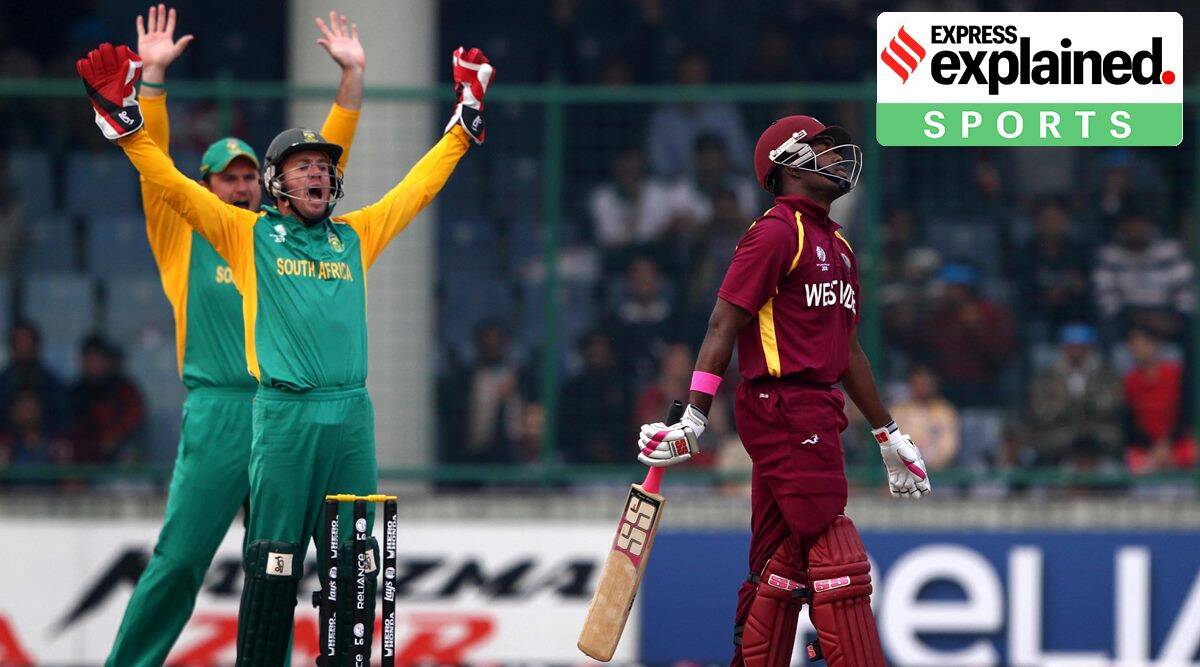 In LBW decisions, as per the existing rule, at least 50 per cent of the ball has to hit any part of a stump. If it is less than 50 per cent, then a batsman will survive on umpire’s call if the on-field decision is not out. The International Cricket Council (ICC) has made a significant change to how LBWs are judged under the Decision Review System (DRS). According to the new set of rules proposed by ICC’s high profile cricket committee, and later approved by the world body, the bowlers will now have a boarder target to aim at.

By including the bails in the ‘wicket zone’, the bowlers will now have more chance of getting LBW decisions in their favour, although the ICC Cricket Committee headed by former India captain Anil Kumble has retained umpire’s call.

How has the wicket zone been increased?

For example, if an umpire has adjudged a batsman not out, under the old LBW rule through the DRS, more than half the ball needed to hit the bottom edge of the bails for the decision to be overturned. Under the new rule, more than half the ball needs to hit the top edge of the bails for the on-field decision to be reversed on review.

So, with extra 1.38 inches, the bails’ height, coming into the equation, the bowlers now have a little more room/area for LBWs. Under the old rule, deliveries just clipping the bails stayed with umpire’s call. Following the change, the on-field decision will be reversed if 50 per cent of the ball is hitting the top edge of the bails.

What is umpire’s call?

Umpire’s call is about the DRS giving the benefit of the doubt to the decision taken by the on-field umpire. In LBW decisions, as per the existing rule, at least 50 per cent of the ball has to hit any part of a stump. If it is less than 50 per cent, then a batsman will survive on umpire’s call if the on-field decision is not out.

Why does the rule allow the benefit of the doubt to on-field umpire?

For two reasons… ‘The umpire’s decision is final’ is one of the basic tenets of cricket. More importantly, technology is not foolproof. It is widely accepted that Hawk-Eye or ball-tracking has a margin of error from 2.2 mm to 10 mm. This is why umpire’s call is trusted in marginal LBW decisions.

“The principle underpinning DRS was to correct clear errors in the game whilst ensuring the role of the umpire as the decision maker on the field of play was preserved, bearing in mind the element of prediction involved with the technology. Umpire’s Call allows that to happen, which is why it is important it remains,” Kumble said via the ICC press release.

Does it re-approve soft signal as well?

The game’s governing body didn’t categorically mention anything about soft signal; a matter of debate following a couple of contentious decisions during the recently concluded India versus England T20I series. But the ICC has confirmed the retention of ‘umpire’s call’, so it is presumed that soft signal will not be done away with. Soft signal for catches is also an on-field umpire’s call.

Has ICC toed the MCC line for umpire’s call?

The house was divided as regards to the use of umpire’s call in LBW decisions at the Marylebone Cricket Club’s (MCC) World Cricket Committee meeting in February.

While some members spoke in favour of “disregarding” the original (on-field) decision to make things simpler, other members were satisfied with the current system “to retain the human element”. The Committee, however, unanimously spoke about the standardisation of technology for all international cricket “rather than relying on the host broadcasters’ own agreements”. For soft-signal, the Committee proposed that the on-field umpires could give an “unsighted” signal to the TV umpire for catches outside the 30-yard circle.

Does umpire’s call make things confusing for players and viewers?

Virat Kohli thinks so. “According to me, umpire’s call right now is creating a lot of confusion. When you get bowled as a batsman, you don’t expect the ball to hit more than 50 per cent into the stumps to consider yourself bowled,” the India captain had said ahead of the ODI series against England.

“So from basic cricket common-sense, I don’t think that there should be any debate on that. If the ball is clipping the stumps, that should be out whether you like it or not, you lose the review,” he added. Sachin Tendulkar and Shane Warne, too, have questioned the logic behind retaining umpire’s call. “… so when the decision goes to the third umpire, let the technology take over; just like in Tennis – it’s either in or out, there’s nothing in between,” Tendulkar had said.

What are the other tweaks?

A player can now ask the umpire if “a genuine attempt has been made to play the ball” (deliberate padding or not) before going for an LBW review. Previously, it was all about the umpire’s interpretation and the bowling side wasn’t authorised to ask the question.