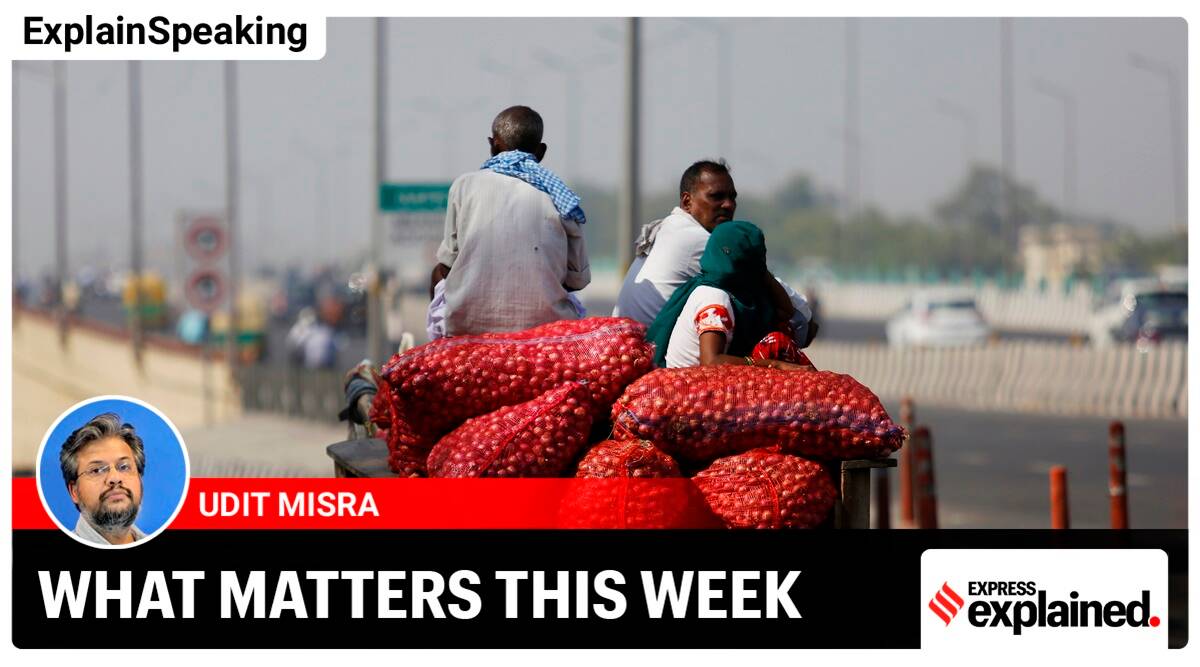 Urban poor have been the worst affected by inflation since the start of the pandemic. Over the coming year, however, even the urban rich might feel the heat of high inflation 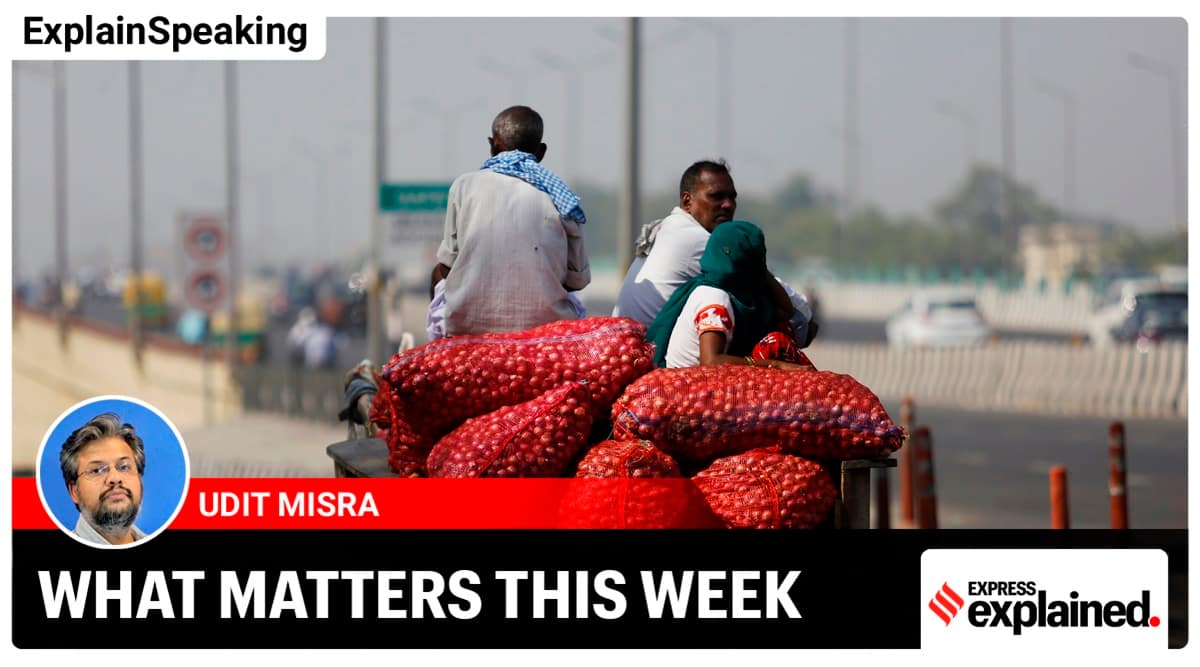 ExplainSpeaking-Economy is a weekly newsletter by Udit Misra, delivered in your inbox every Monday morning. Click here to subscribe

When the Covid pandemic started sweeping across one country after another in 2020, the main concern among policymakers was to save lives and ensure that the likely economic recession does not become a prolonged one. In other words, reviving economic growth and containing the spread of the pandemic were the only two concerns.

But as the events of the past few months have shown, both policymakers and economists have been surprised by the rise of inflation as an equally important challenge. Most economies managed to bounce back within a few quarters, and even though growth worries are likely to linger for a while, it is the steady and sharp increase in prices that has fast become the overwhelming concern. For the most part, it is a story of a wide mismatch between supply bottlenecks on the one hand and unexpectedly fast demand recovery on the other.

October’s data in the US revealed the highest inflation rate (on a year-on-year basis) in over three decades. But the US is not alone. There are several countries that are struggling with high inflation. Germany has 4.5%, Russia has over 7%, Brazil has 10%, Turkey has 20%, and Argentina has over 50%.

Globally, the term “stagflation”, which was popular in the 1960s and the 70s, has regained currency. It essentially describes a phase when a country’s economic growth is “stag”nant and while it also suffers from persistent high in”flation”.

But in a note last month, analysts at Morgan Stanley, a leading financial services firm, argued that the world isn’t there yet.

“The 1970s are a long way away from our expectations or market pricing. Scenarios of slowing growth and rising inflation clash with our global forecasts of the opposite.” 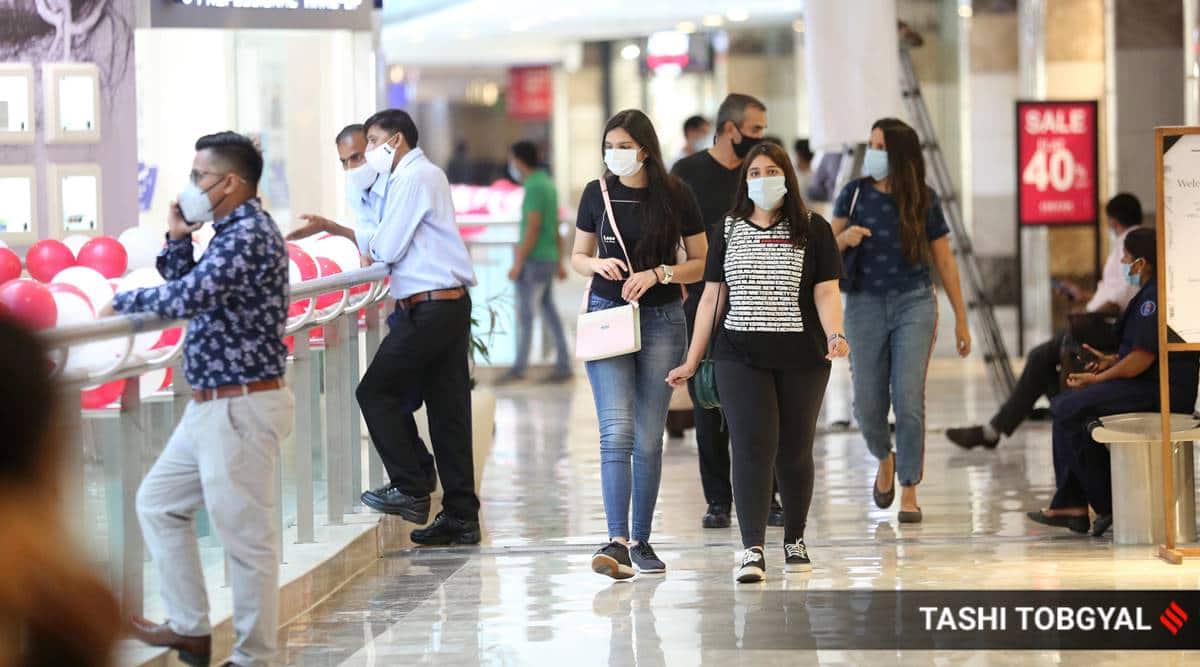 India may not be staring at stagflation but it has its own set of worries on the inflation front. On the face of it, in the past few months, headline retail inflation — measured by the Consumer Price Index or CPI — has fallen well within the RBI’s comfort zone.

But there are reasons why Indians are likely to face sustained inflationary pressures not just for the next 6 months — that is, until the end of the current financial year — but also in the next financial year (that is, 2022-23).

The first thing to remember is that high inflation predates the start of the pandemic in India. Data shows that retail inflation was above or near the RBI’s comfort zone since late 2019. These price pressures continued to stay elevated during the pandemic despite a complete collapse of demand.

In other words, they go up for short-term reasons and then fall just as fast. For instance, unseasonal rains during late October and early November tend to spike vegetable prices — as one annually notices with prices of onion and tomatoes.

But if these prices stay up for long, they do tend to seep through to what is called the “core” inflation. Core inflation is a measure of retail inflation that ignores inflation in food and fuel prices. Using core inflation provides policymakers and economists with a more robust measure of inflation — that is, a measure that is seen to be more reliable.

What is worrying for Indian policymakers is the fact that core inflation is now higher than headline inflation (See the charts below; source: ICICI Securities). Why is core inflation high and how does it matter?

The problem with core inflation is that it is often quite sticky. In other words, it tends to stay the way it is. Right now it is close to 6% and analysts expect that it may stay elevated for a while. Analysts at ICICI securities believe that unless international crude prices come off sharply, core goods inflation may stay elevated. Further, they believe, core inflation (especially for services) may also pick up as economic reopening gains traction. 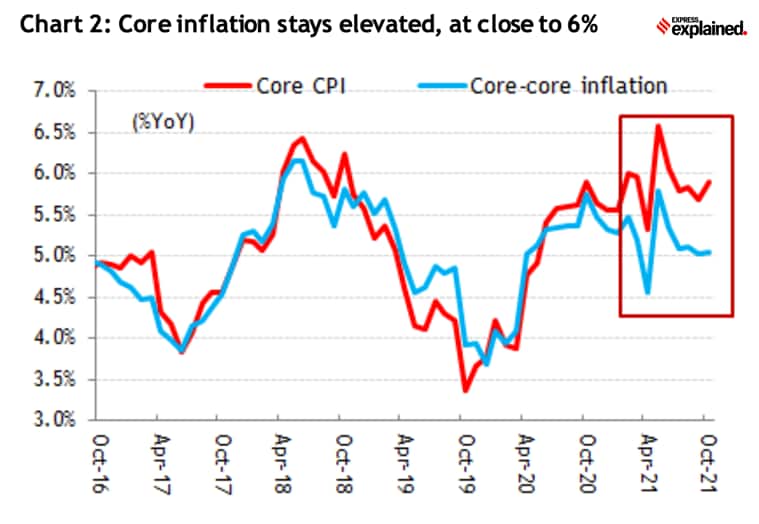 “We expect core inflation to average around 6% in Nov-Mar, and likely average ~5.5% next fiscal as well. If this expectation turns out to be true, we doubt the steady downtrend in inflation trajectory projected by RBI next fiscal would crystalize,” write Prasanna A, Abhishek Upadhyay, and Tadit Kundu of ICICI securities in a recent note.

Who has been worst affected by high inflation in the recent past?

Last month, Crisil Research came up with a detailed paper explaining how the same level of inflation affects different sections of India differently.

The table below (Source: CRISIL) details the CPI inflation across different income classes. Crisil has used the National Sample Survey Organisation (NSSO) data to break down the population between the bottom 20%, the middle 60%, and the top 20% for both urban and rural areas. 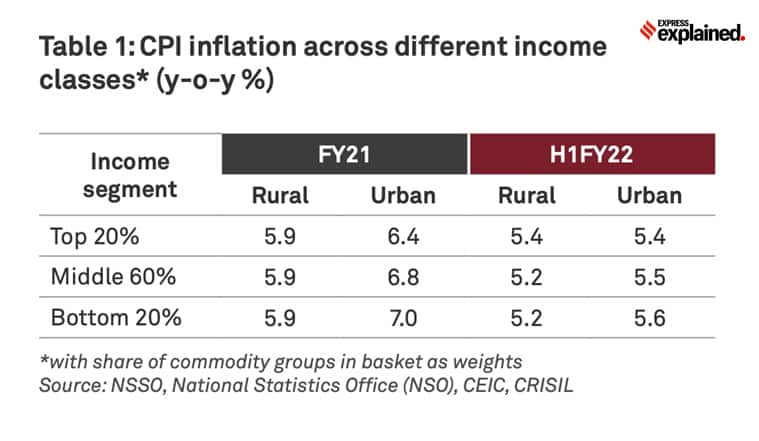 As one can see, both during the last financial year and in the first half of the current one, it is the urban poor (bottom 20% in the income category) that faced the highest inflation rate. In other words, when it came to inflation, the urban poor were worse off than the rural poor.

If this pattern persists, how will the different sections of society be affected?

The next two charts — one each for rural and urban areas — try to match two things for people belonging to each of the income categories. One, their consumption pattern with the inflation rate for that commodity.

In rural areas, see the chart below (Source: CRISIL) alongside, it can be seen that people belonging to the bottom 20% income bracket must be enjoying some relief because the biggest category they spend on — food and beverage (which accounts for over 60% of their total consumption) — has just a 3.5% inflation rate. But the rich, who spend 48% of their total consumption on goods and services that are neither food nor fuel, will face a tougher time since core inflation is 6.6% and likely to stay high for a little while. In urban areas, as represented by the chart below (Source: CRISIL) alongside, it is the fuel price inflation that has been soaring at almost 15%. The worst affected is the poor, who spend almost 11% of their income on buying fuel.